Do you have a sweet tooth? I do. My coworkers sometimes give me wagashi, or Japanese sweets at the office. Eating them always makes me guilty, but they also relax me when I am tired or busy. Then I feel like I could go another few or more hours at my desk, non-stop!

Today, it’s my turn to treat my coworkers. I bought some local sweets to throw a little tasting party with my coworker Michiko, who has a sweeter tooth than me.

“Detchi” means an apprentice boy. The word was mainly used in the Kansai region in the Edo period.  Yokan is a thick jellied wagashi made from red bean paste, agar, and sugar. 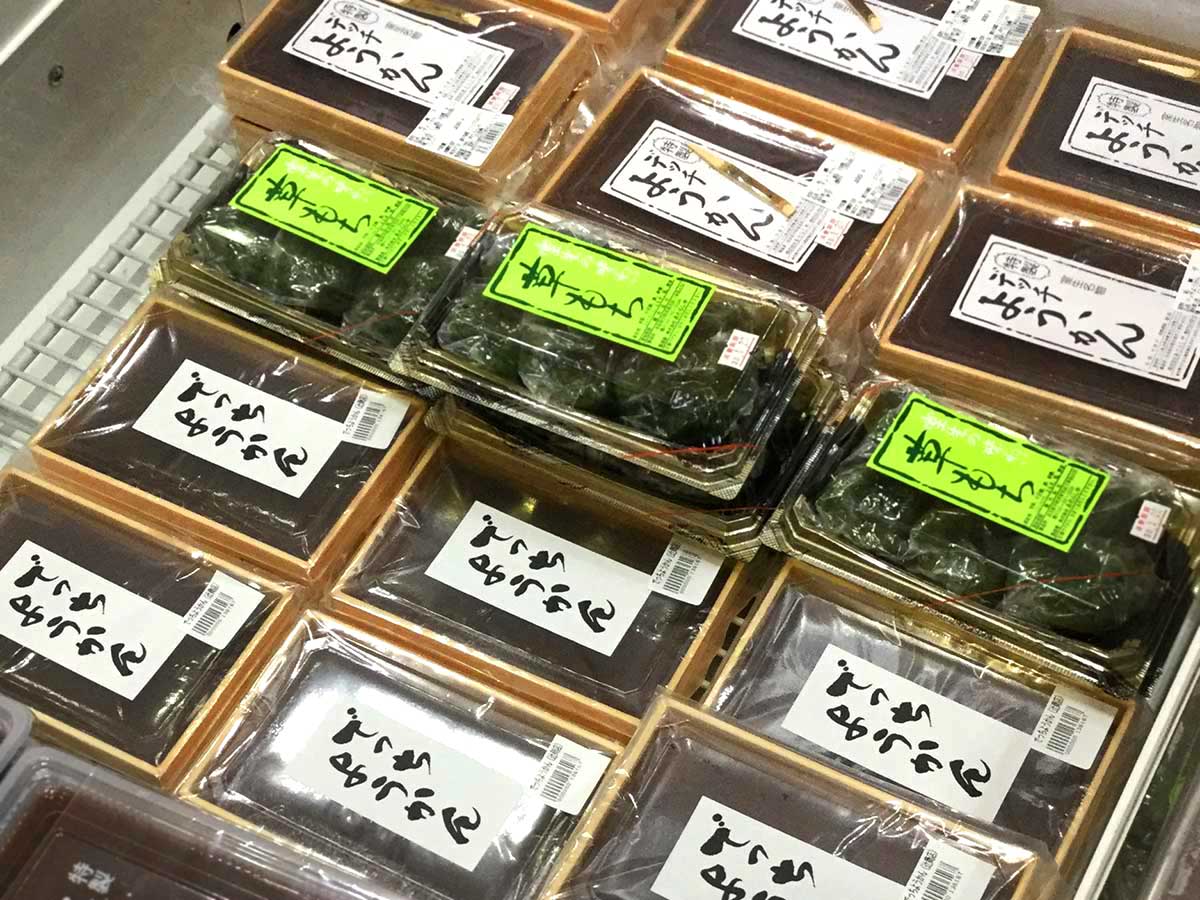 Akiko: Yes, I wanted to eat this, but I never had a chance! Since I came to work in the ENN area, I realized I see them sold everywhere! I don’t see or hear of them where I am from. And I thought the name was funny.

Michiko: Detch Yokan is a pretty popular wagashi in some parts of the Kansai region. You want to know why it has such a name?  Various stories exist depending on the areas, but around here, I heard confectionary apprentices added some water to left-over yokan to increase the volume so that they were able to eat more of it after work. So the texture of Detch Yokan is much looser than regular yokan.

Akiko: That’s smart of them! But… it looks like one big square brown jelly (or jello). 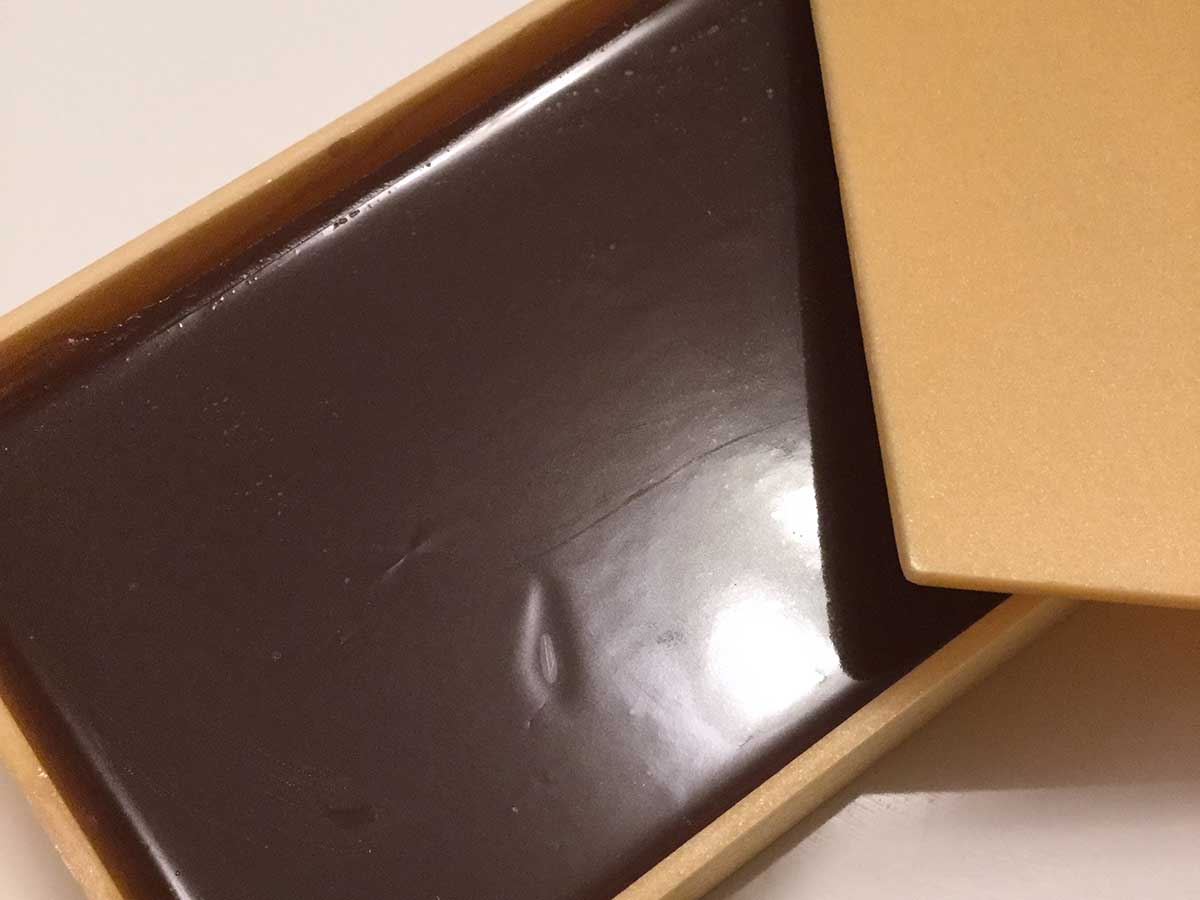 Michiko: I know, right? But it’s not like jelly or chocolate mousse or anything. Try some. I’ll cut it for you. Here you are. 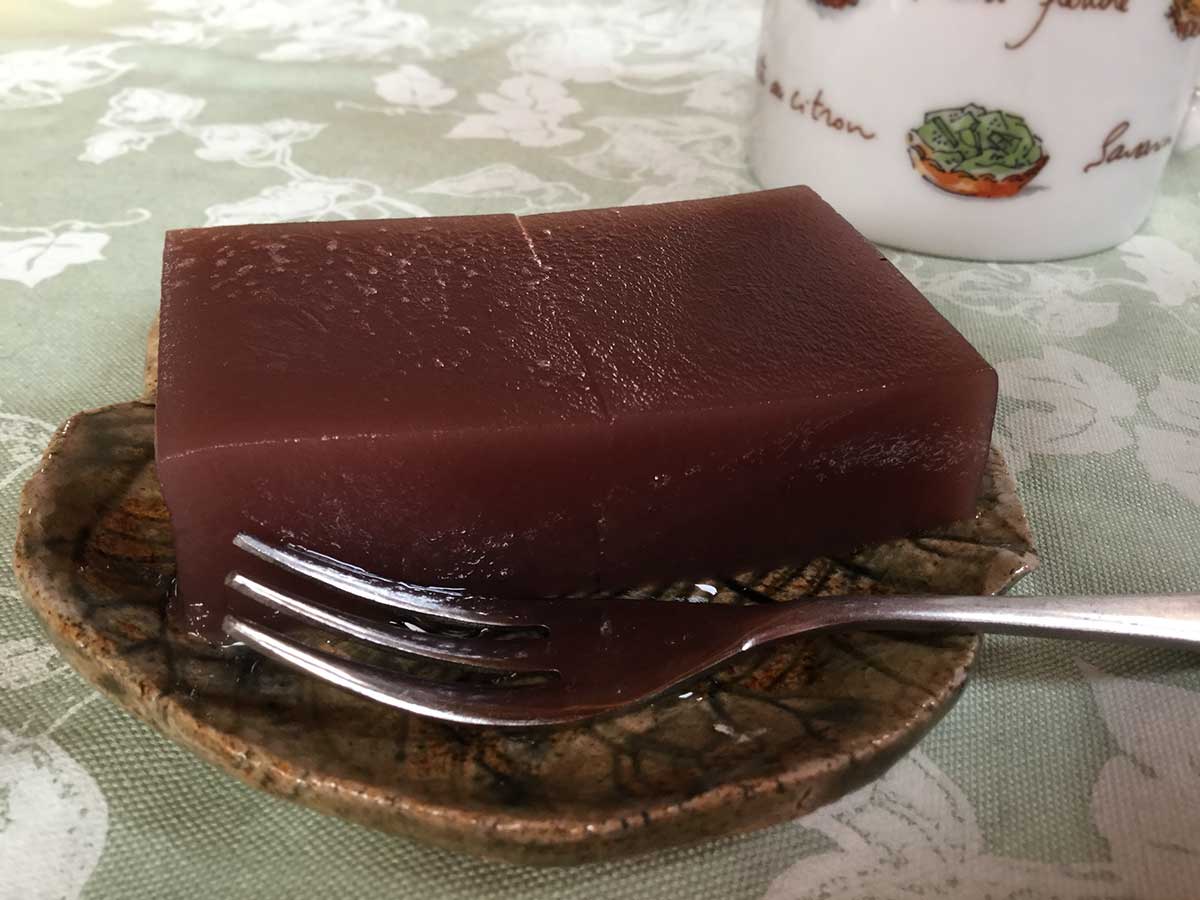 Akiko: Mmm. It’s softer than mizu-yokan , and it’s good! It has less springy texture than jelly, too. I want to cool it in the fridge and eat it in the summer. It will be so refreshing!

Michiko: I think so too, but actually, it’s considered as a dessert eaten in the winter here. I heard it used to be sold only in winter back in the day.

Akiko: Really? Why?? I thought it was a perfect dessert for summertime…

Michiko: Before refrigerators were widely used, it was a special sweet treat you could get to eat only during the winter. Also, confectioners would make Detchi Yokan with the year’s fresh red beans harvested in October, which made the yokan taste the best in the winter.

Michiko: By the way, the taste and texture differ depending on the confectioners. Every local has their favorite detchi yokan.

Akiko: Do you have your favorite one, Michiko?

Michiko: Yes, of course! But I won’t tell you [laughs]

Akiko: I know this is a popular snack you can get near Akame 48 Waterfalls. My teenage daughter refused to eat it when she heard the name [laughs]. Let me tell you what they are and how they got such a hilarious name. They’re ninja shaped manju made from sweet potato, and some of them have anko filling. They were named “Hekoki” after the main ingredient, sweet potato, which is thought to easily generate gas––so yes, Hekoki Manju means fart-producing buns [laughs]

Michiko: They come with various anko fillings; red bean, white bean, chunky, smooth, matcha bean paste. Other than anko, they have cream cheese, apple filling, and so on. But a lot of locals love plain one, which is the original flavor without filling. 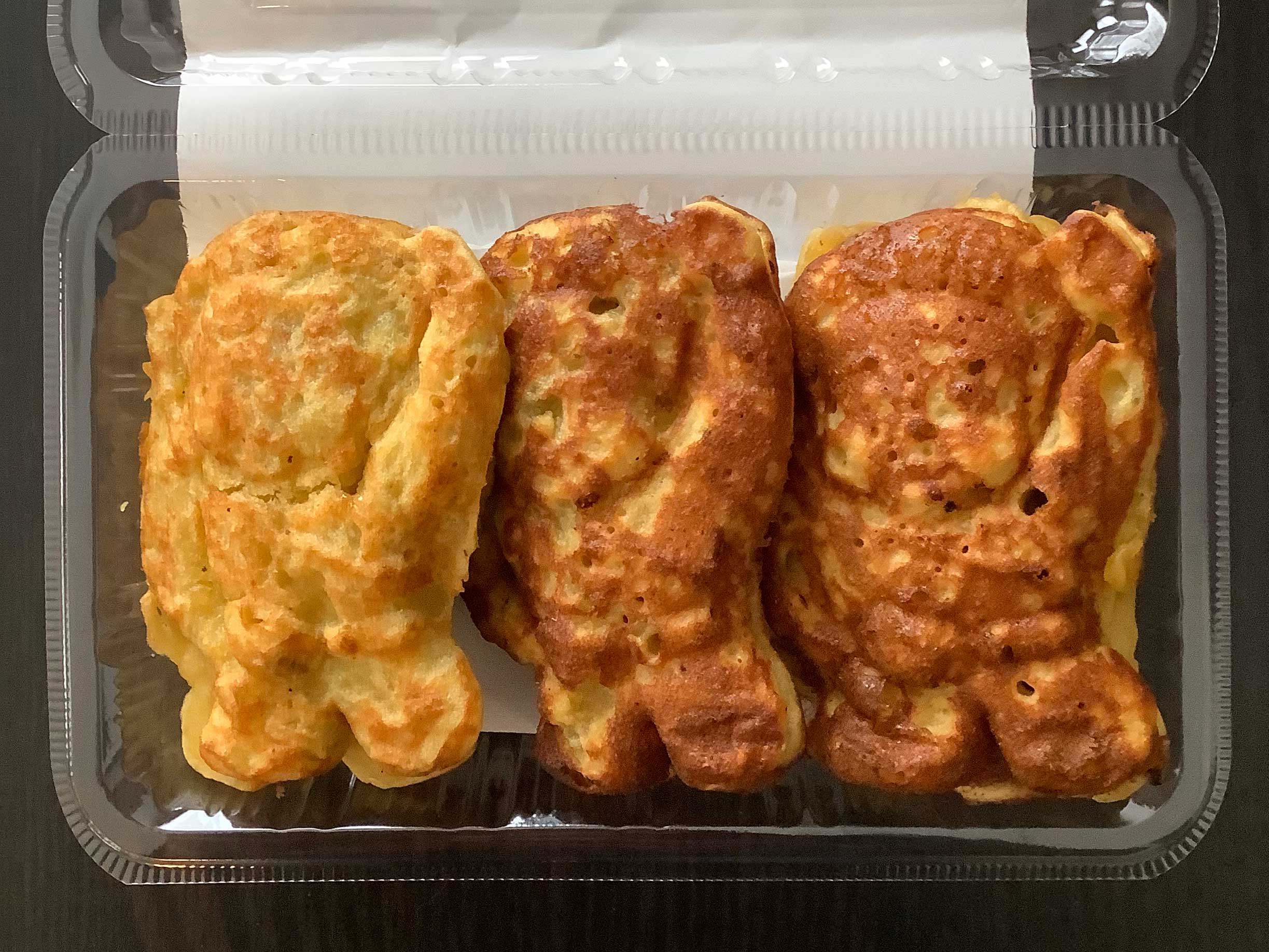 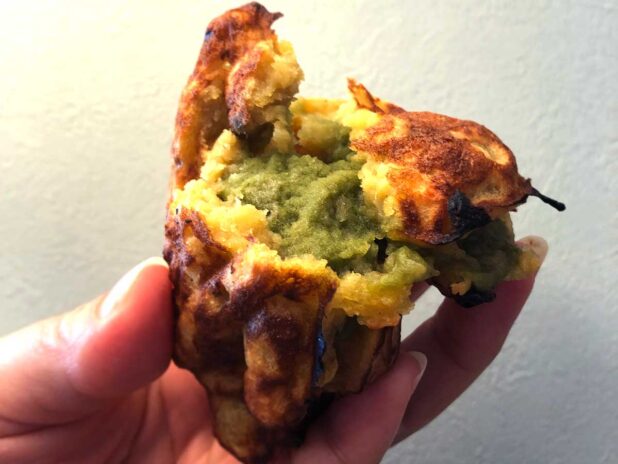 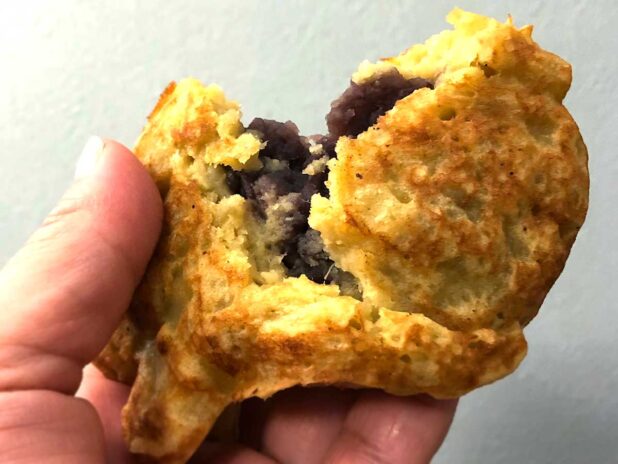 Akiko: Mmm. It’s soft and moist and tastes like homemade. Very good. Mine has matcha bean paste in it. And yeah, I would be totally fine with the plain ones because the sweet potato batter has a slightly sweet taste!  I would want to reheat and eat those for breakfast with milk or coffee the next morning.

Michiko: I do that all the time. Oh, mine has sweet chunky red bean paste inside. It’s so good. I love anko! I could eat these forever! Do you mind if I have another one?

Akiko: No, go ahead! 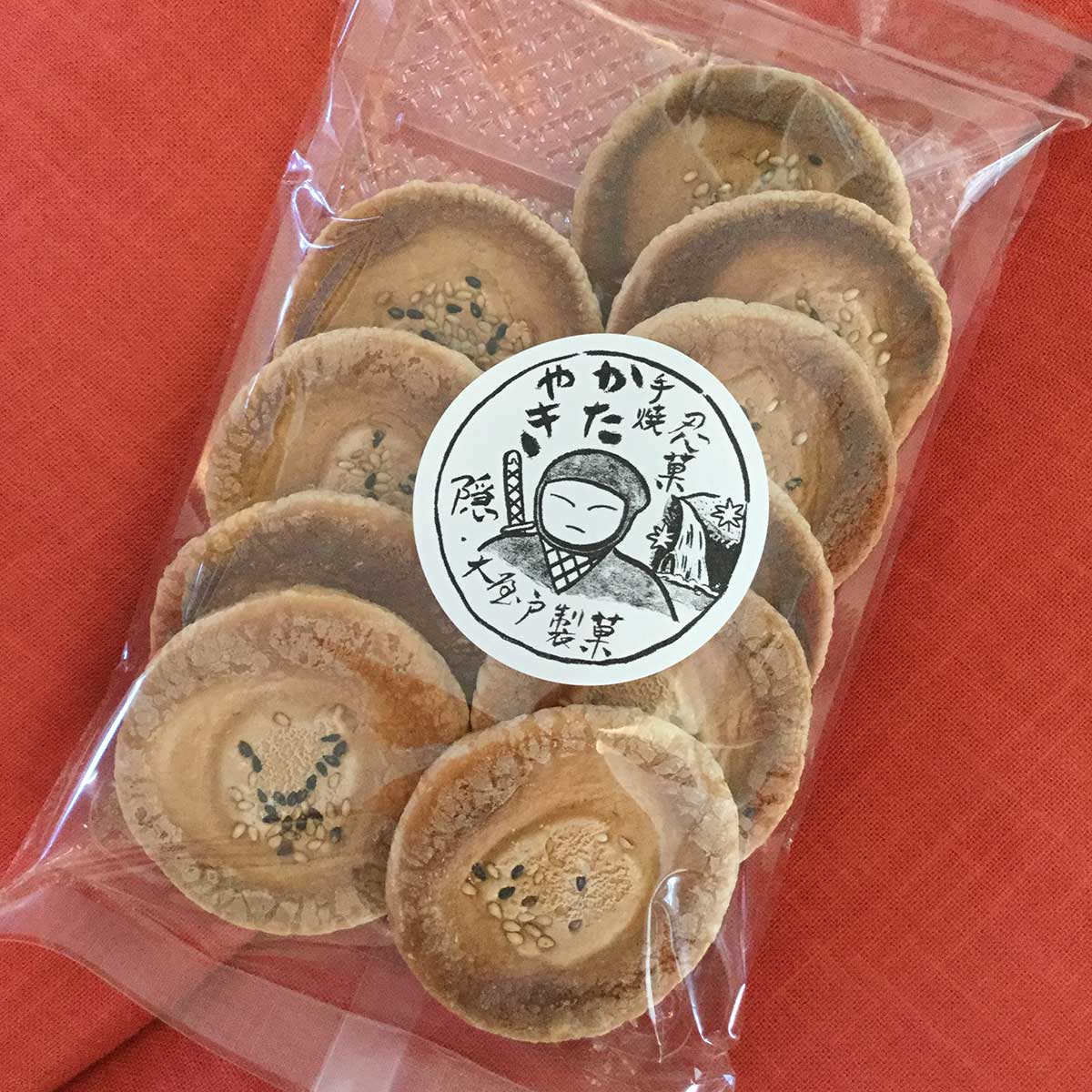 Michiko: We’ve got more. Are you okay? Next, Katayaki.

Akiko: I know those! They’re hard-baked crackers, and a local specialty of the Iga region (Nabari is a part of the Iga region). They’re so hard that they can be preserved for a long time. I heard ninja carried them around as emergency food. They ate them while they were training or on a stakeout.

Michiko: That’s right. Make sure you break them into pieces before you eat. Otherwise, you would break your teeth… Sometimes they’re even sold with a small wooden hammer to crack them. Or you hold one cracker in each hand and hit them each other to crash. So when you give them to someone who doesn’t know about Katayaki, tell them to be careful!

Akiko: Okay, now let’s eat. Agh, this is hard!! I knew they were, but it really IS! No wonder they preserve well because it’s hard as stone. But the taste is natural and mild. It takes me back to my childhood.

Michiko: That’s because only natural ingredients are used, no artificial additives. Did you know there’s Katayaki with anko? Here. They’re not as hard as the regular Katayaki, though [laughs]

Akiko: I didn’t know that! 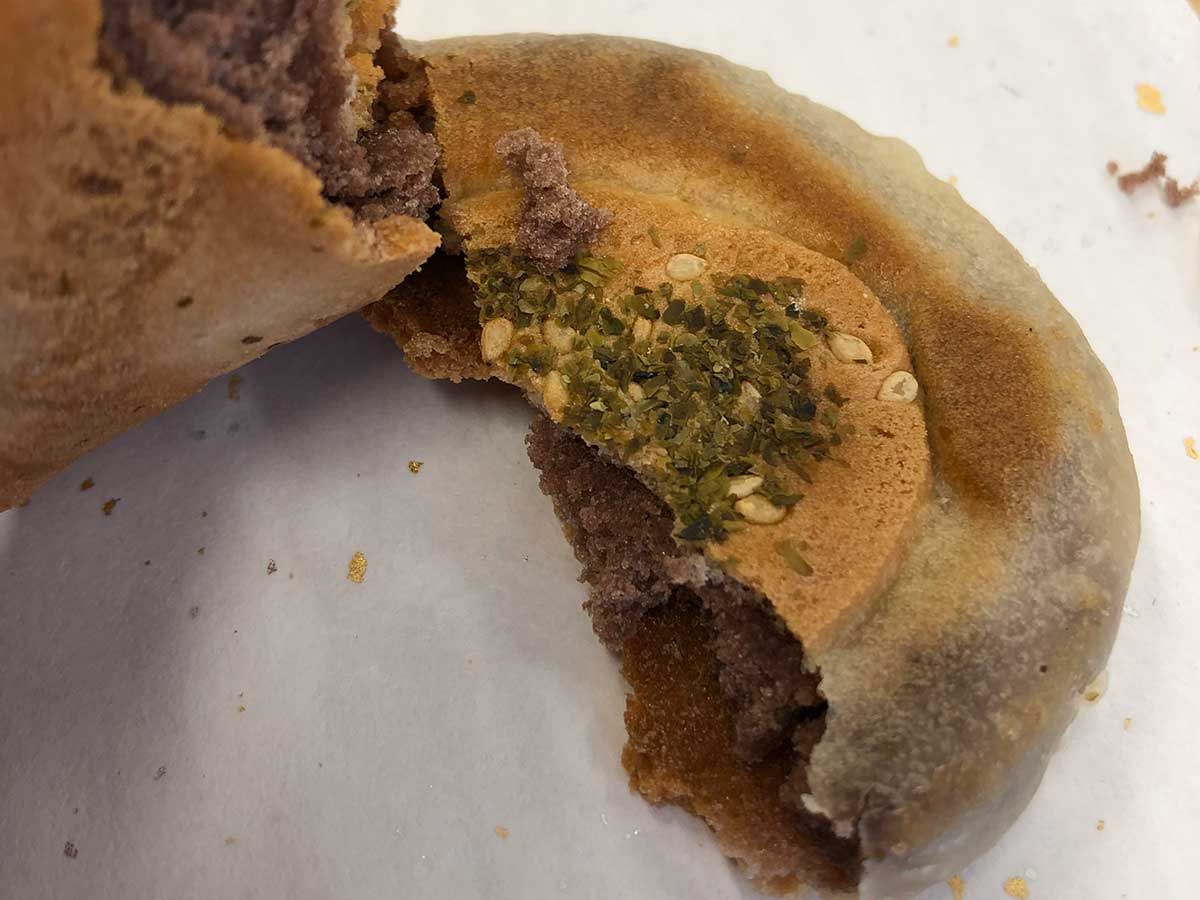 We tasted 3 snacks, and the party is over. We are so full after we ate Karaage (fried chicken) lunch plate. The doctor told us to lose more weight when we went for annual check-ups… I will start exercising tomorrow! Well, okay, I will TODAY!