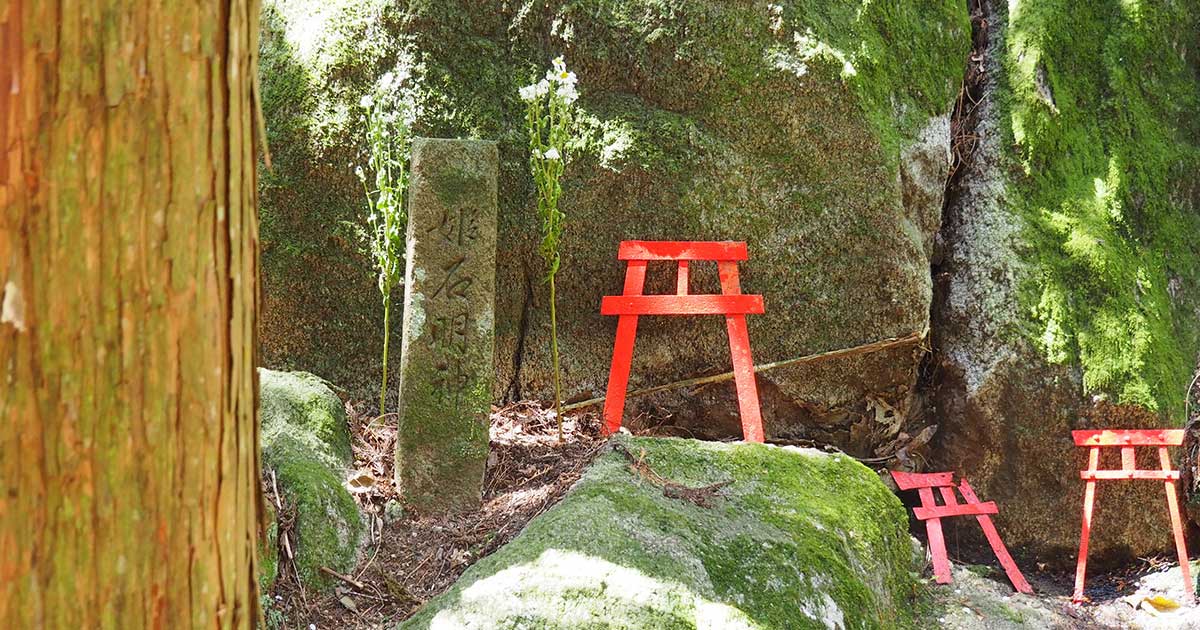 Are you a Nara person or a Kyoto person?

I know Kyoto is one of the most popular travel destinations in Japan. I know some people prefer Nara over Kyoto because Nara has older temples. In the East Nara area, there are more Shinto shrines with even earlier histories than those temples, some of which have interesting legends. I’ll write about one of such old shrines that I visited recently.

The shrine is inaccessible directly by car, so I headed to Maruyama Park because I heard the sanctuary was somewhere near the park.

Maruyama Park is located near the border between Nara and Mie Prefecture, along Ise Honkaido (伊勢本街道), one of the old pilgrimage roads that connect Nara and Ise in Mie Prefecture. I drove to the park from the Mie side, which is on the right. 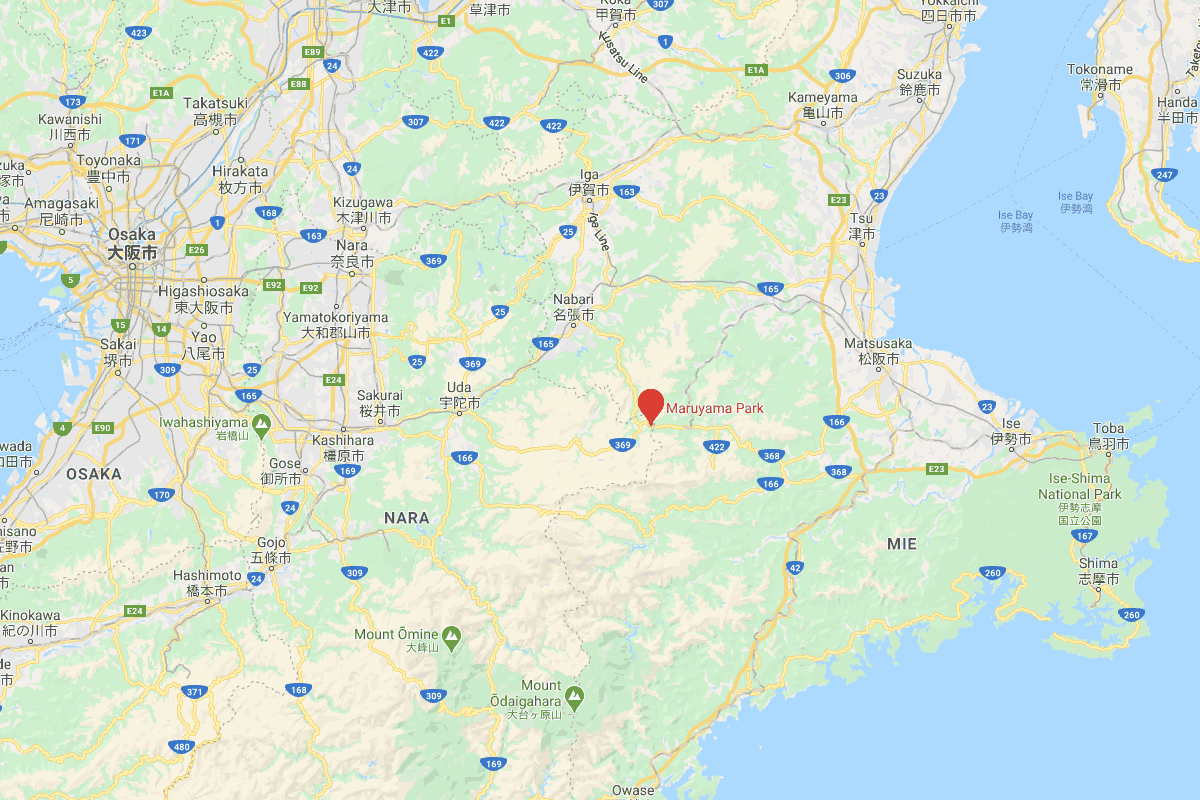 Soon after you enter Nara Prefecture, you get to a tiny traffic circle with a sign of Ise Honkaido. Since I use Google Maps for navigation, I followed her as usual. But as I drove, I was like, “Are you sure, Google??” The road ahead looked so narrow with tall trees on both sides! You know, she often gives you challenging routes, especially when you are driving in rural areas. I checked the street views on my iPad and confirmed there would be a narrow mountain road ahead of me. I didn’t want to take chances! I backed up my car and chose a detour. FYI: the mountain road takes you to the park if you are okay with driving on narrow roads.

I headed for the rest area or drive-in called Michi no Eki (it means ‘road station’) to detour. I went to the bathroom there and left for the destination. This route was so much easier. The roads ran through open rice fields, and I felt good.

Here I am at Maruyama Park 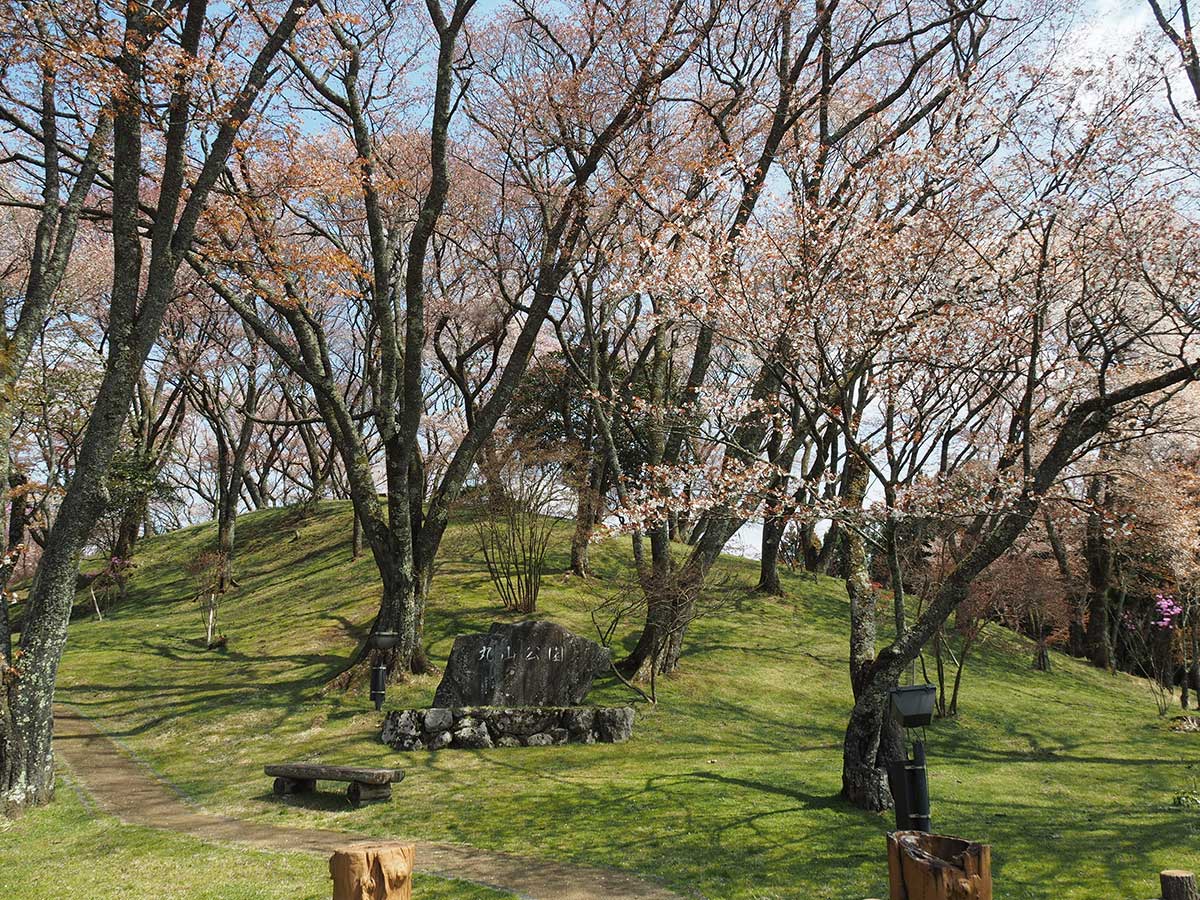 It’s a small hill with many cherry trees, I was lucky to see the flowers in bloom. The views from the mountain were impressive. What was more impressive and mysterious was a stone statue of an ascetic standing on the hilltop, surrounded by blooming cherry blossoms. 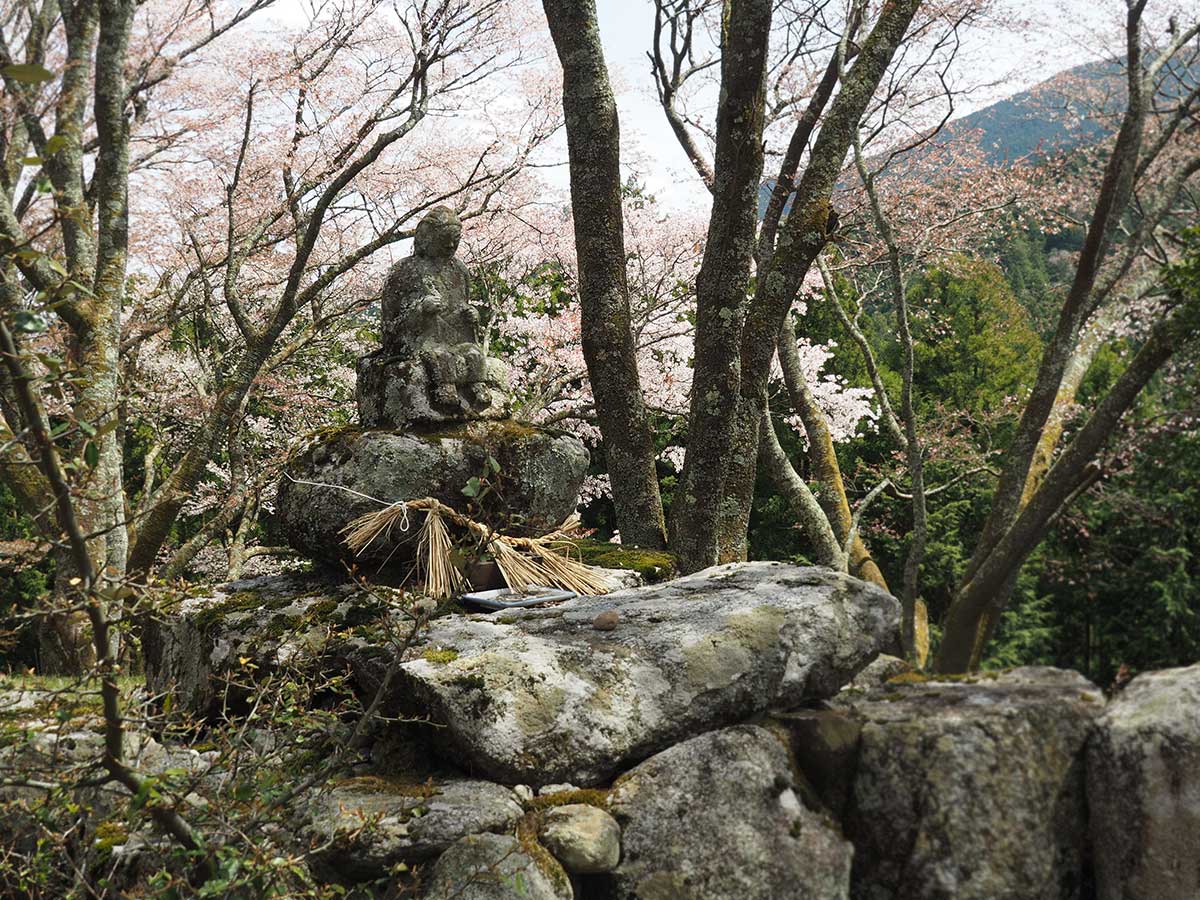 You can only feel it by actually being there

I heard there’s a path by the parking lot that leads to this hidden shrine called Himeshi Myojin. Okay, Here‘s the path. 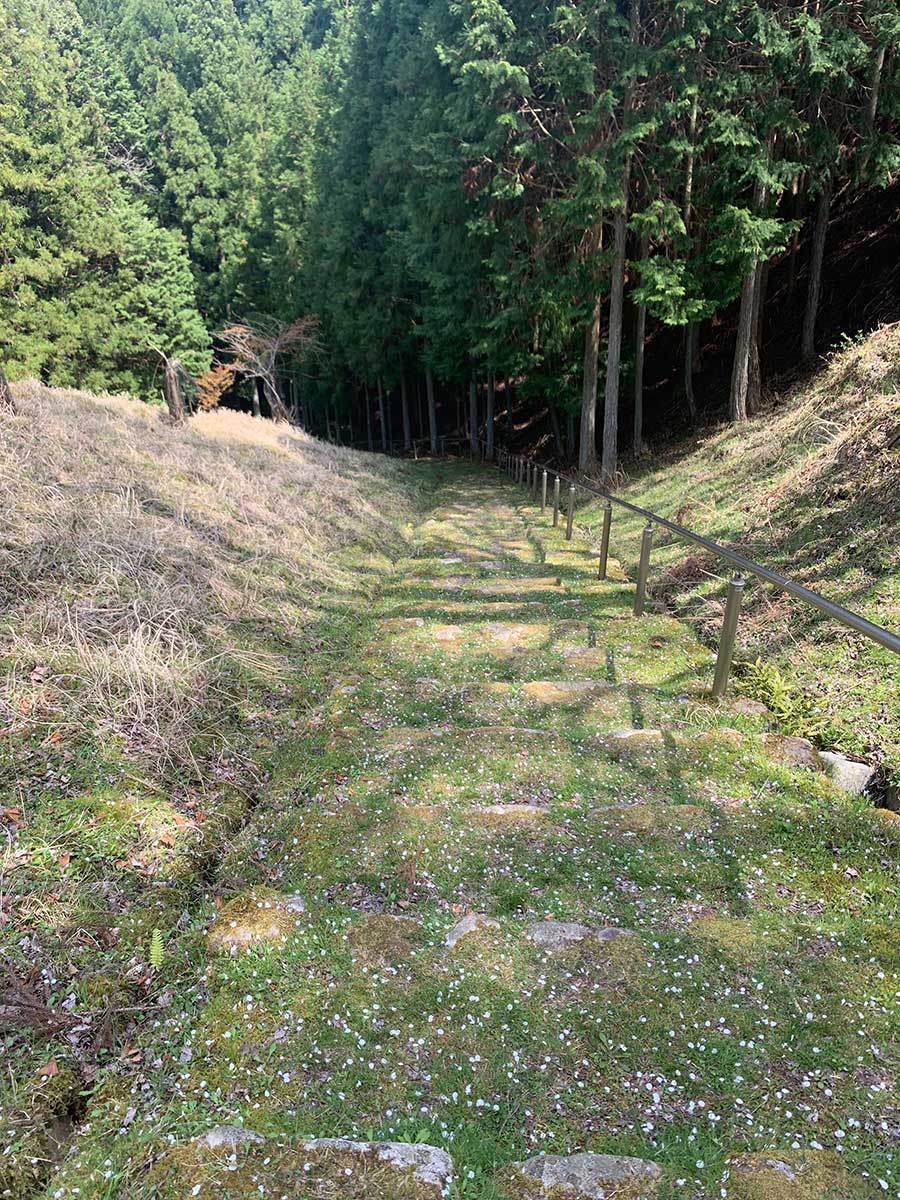 It was a gentle slope with wide steps. Cherry blossom petals on the green steps were so pretty. But I couldn’t see what was there at the end of the path at all!! Remember, I’m scared of a narrow space. Should I proceed or should I go back? This time I continued and walked down the slope slowly.

After I stepped down all the way, I saw an open space right in front of my eyes. It was a tiny sacred space in a wood. The sun shined through the green leaves of tall trees, the red torii gate was glowing in the sunlight, making a vivid contrast with the deep green moss growing on the rocks. The atmosphere wasn’t really healing or relaxing. It wasn’t that spooky, either. Maybe a little eerie? I don’t know how I should describe it with my limited vocabulary, but it was just soooo mysterious! It felt like the air around you had utterly changed once you entered the sanctuary. 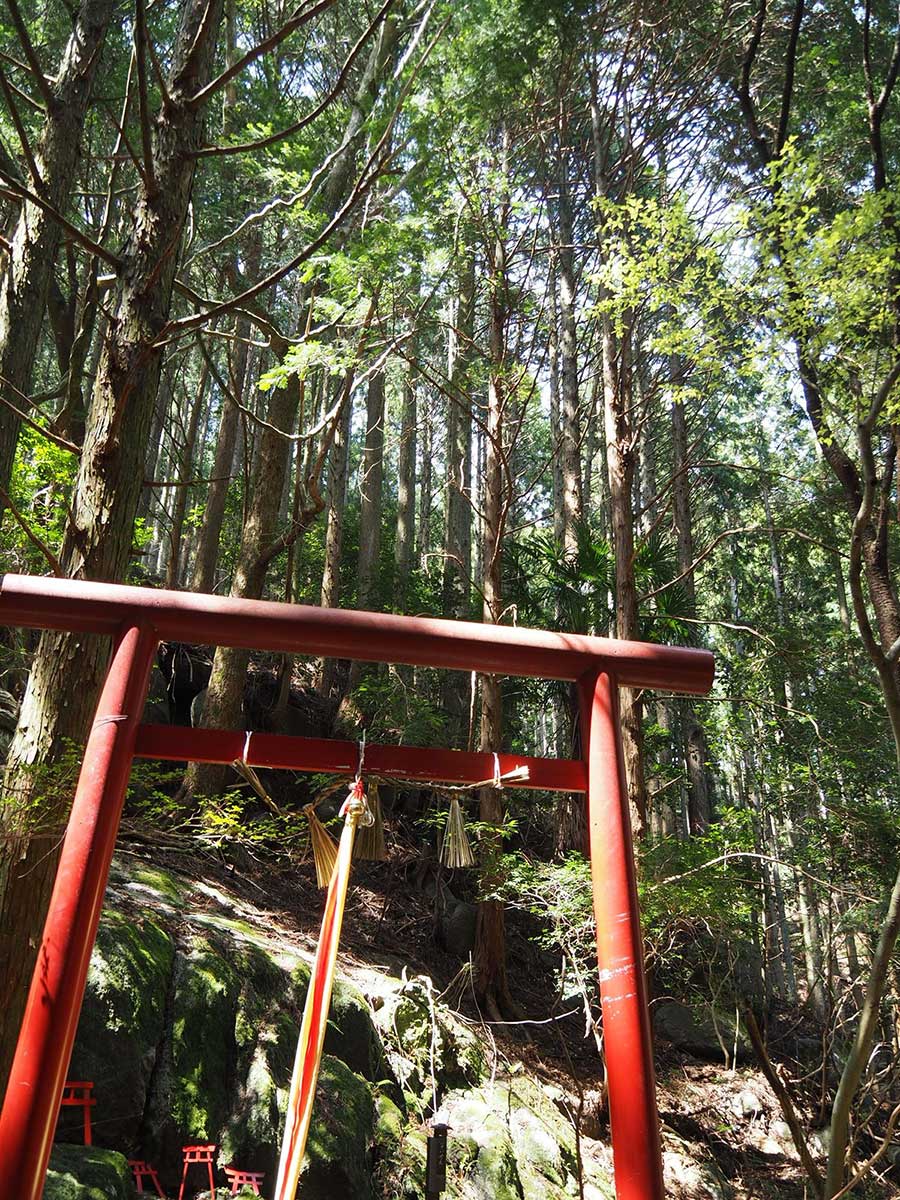 In ancient times, when Ise Shrine didn’t exist yet, Princess Yamatohime is believed to have stopped by Himeshi Myojin when she was traveling to Ise. She was looking for the most appropriate place to permanently enshrine Amaterasu-omikami, the universal patron deity to Japanese people. The legend says the princess prayed to the female buttock-shaped rocks to cure a female disorder here. This shrine also said to bring marriage and smooth childbirth to prayers.

Finding a little shrine in the middle of a wood or on top of a mountain is definitely one of the most exciting things when you travel in the ENN area. Why don’t you come visit here to FEEL the atmosphere that you can’t experience by looking at pictures?