Do you know what the largest amphibian is? Giant salamanders! And among the giant salamander family, there is a species called Japanese giant salamander. The species is native to Japan and is designated as a special natural monument, which means very very rare. Knowing all that information made me want to see them so much because I love rare creatures.

The ENN area has a lot of mountain streams with crystal clear water, which makes the habitats of giant salamanders. You might be wondering where you can find them in the area. Well, it’s very hard to spot one, but if you are really lucky or really hard-working patient, you might be able to.

But what if you are not a lucky person? What if you are as lazy as me? The good news is, you can see giant salamanders at this place in Nabari City.

There’s a famous place called Japan Salamander Center near Akame 48 Waterfalls, where you can see various kinds of salamanders including the Japanese one. But I am not going to talk about it here. I’ll tell you about Nabari City Local History Museum, which used to be an elementary school and now exhibits various kinds of local folklore materials, including giant salamanders caught in the city. I called the place beforehand, and I took off to visit there just to see the salamanders.

Can I Cuddle a Salamander?

As soon as I arrived, the staff guy took me to the swimming pool. He unlocked the wired gate to open and led me to the inside.
‘OK, there’s a pool, but I can’t see anything inside. It’s very dark,’ I thought.
“Come closer,” he said. So I did.

“Oh, wow!” I saw so many black…tires! Well, of course, I found giant creatures sitting still under the water between those tires. There were more than dozens! A hundred? Maybe more!! The guy explained that all the salamanders kept in the museum are a hybrid between Japanese and Chinese or other kinds of species, not a pure Japanese one. 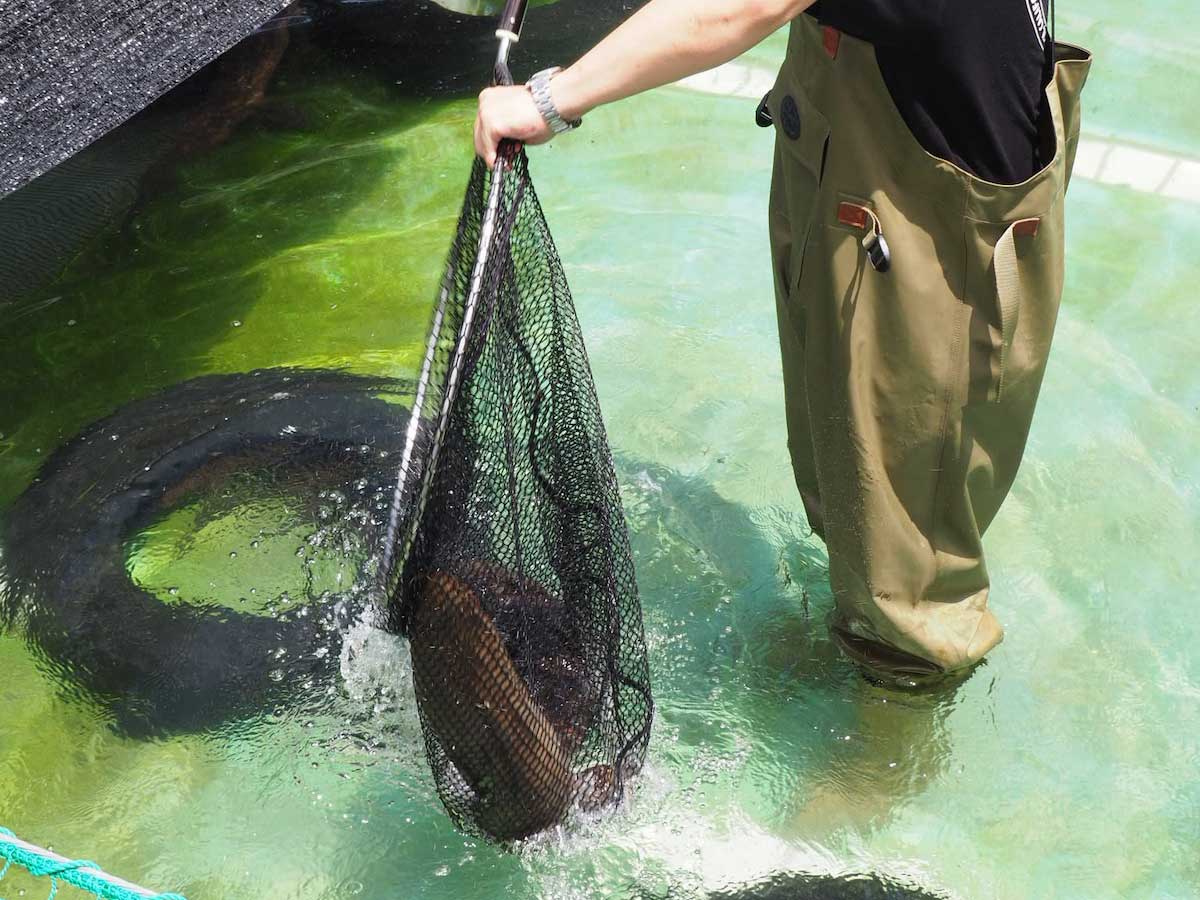 “I’ll pick one up for you,” said the guy. He scooped one with a fishnet quickly and put it in a plastic box.
I asked him, “can I cuddle?” because it looked tamed and quiet. 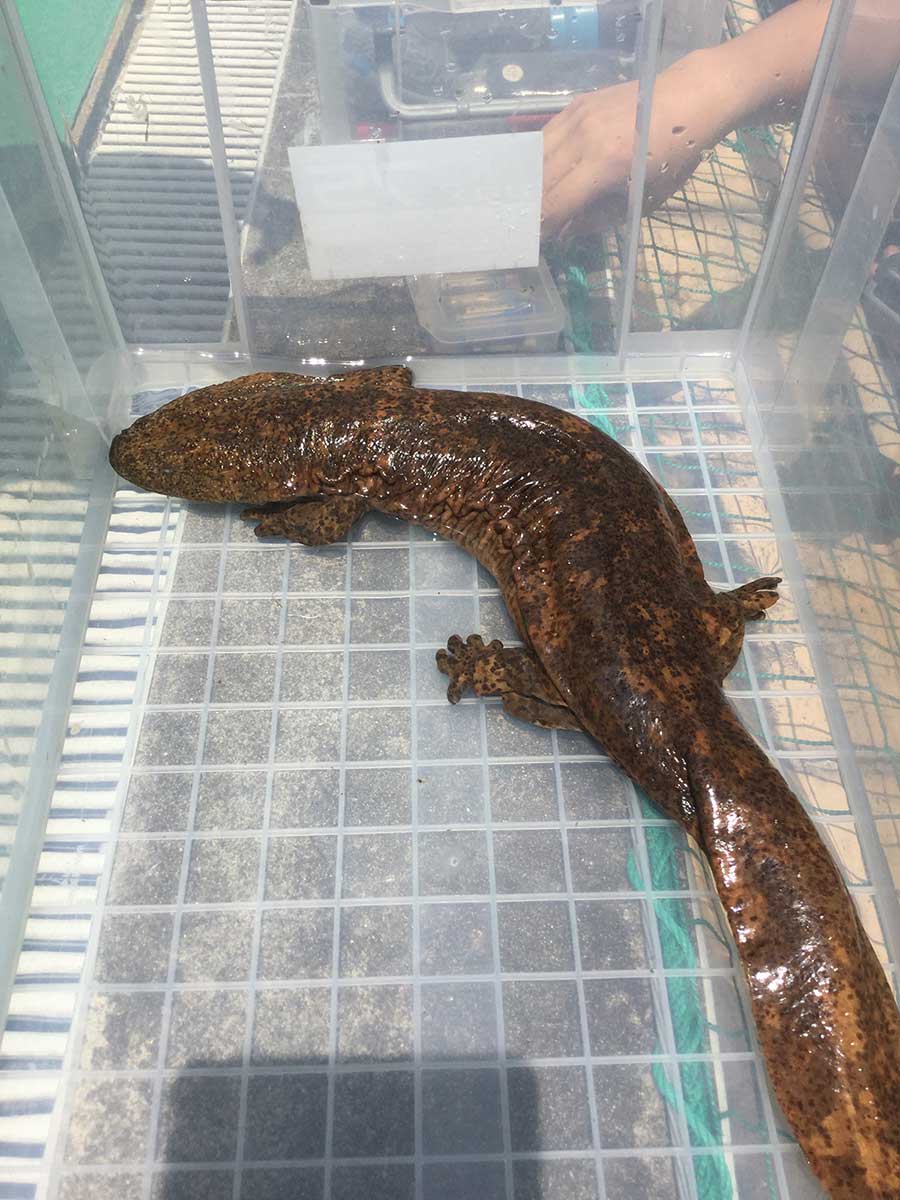 He said, “No, no. But you can stroke it on the back. Just make sure you do so from its back. Otherwise you might get bitten. ”
I was like, “oh no…”
“It’s fine as long as you put your hand from the back,” he said.

I Touched a Salamander! 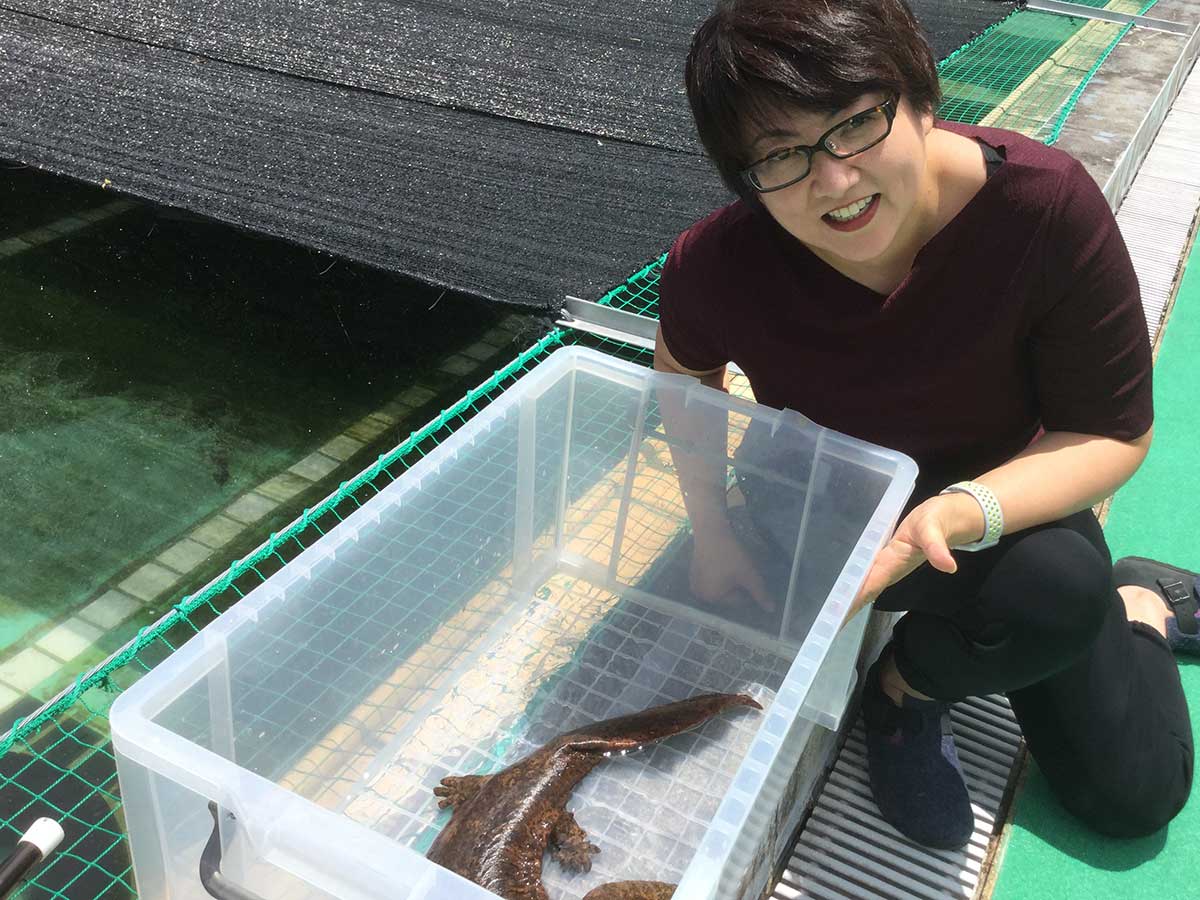 Can you imagine what the texture is like? I thought it was rough and bumpy from its look with a lot of black dots on the skin, but it was totally different! It wasn’t slimy or greasy at all either, but it was so slick and smooth! It felt just like konjac gel. If you don’ t know about konjac, I can say it was like a hard gelatin dessert.

Slowly the staff guy put the salamander back in the pool. According to him, they drain water a few times in a year for regular check-ups. Those are the only times all the salamanders get ashore, i.e., on the poolside. Imagine snaking big creatures covering up the poolside floor! It must be outrageous, lol.

After we left the pool, I was led into the building. We went to a room where I found a lot of small and large fish tanks.
“Do you wanna feed a giant salamander?” he said.
“Yes!” I replied.

He handed me chopsticks and a small paper cup with a fish inside, and told me to dip the fish into the water. I saw a giant salamander named Bo-chan, sitting still on the ground in the tank. It didn’t move a bit.

The capture was so quick that I remembered what I was told at the pool––don’t touch its back from the front”. For your information, Bo-chan is fed once every 3 weeks, and its sex is still unknown.

I found little wiggly things in the small tanks next to Bo-chan.
“They’re baby salamanders.” The guy said. “You can scoop them by hand.” 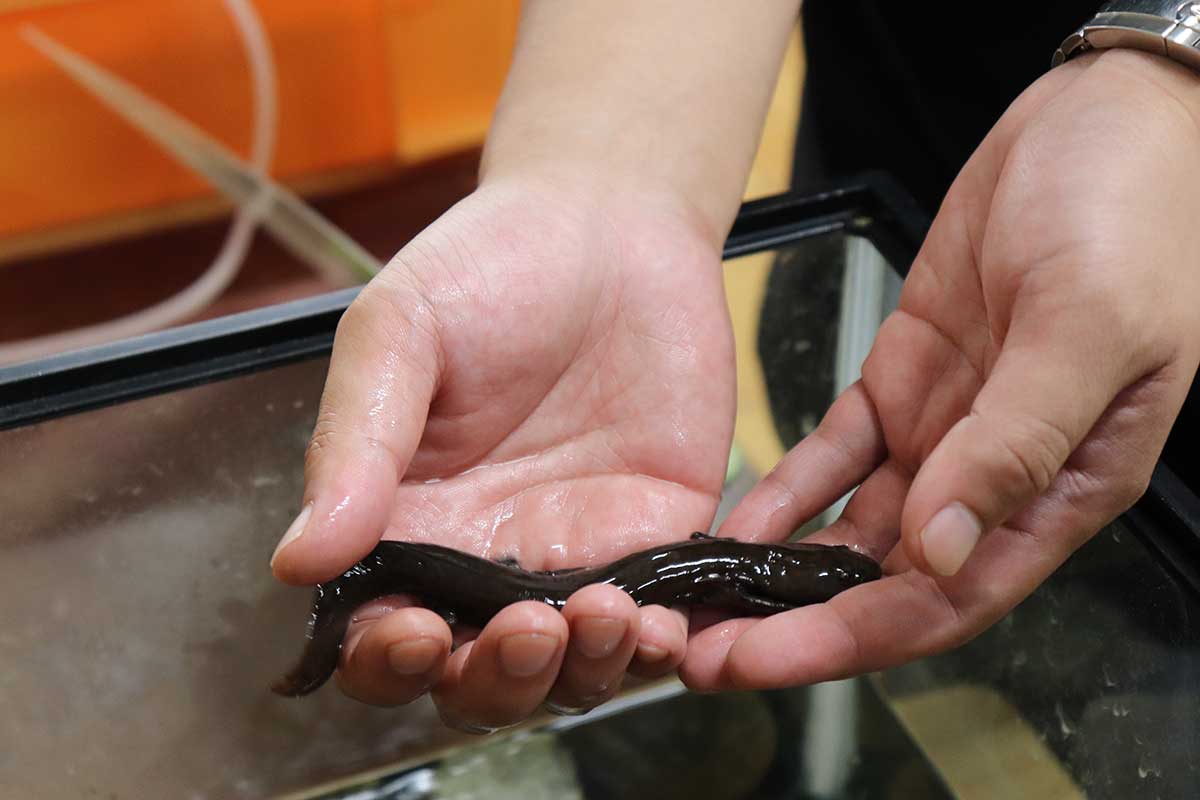 Baby salamanders don’t bite, they just swim in your hand. They looked like tadpoles. That explains well that they are in the same group as frogs. 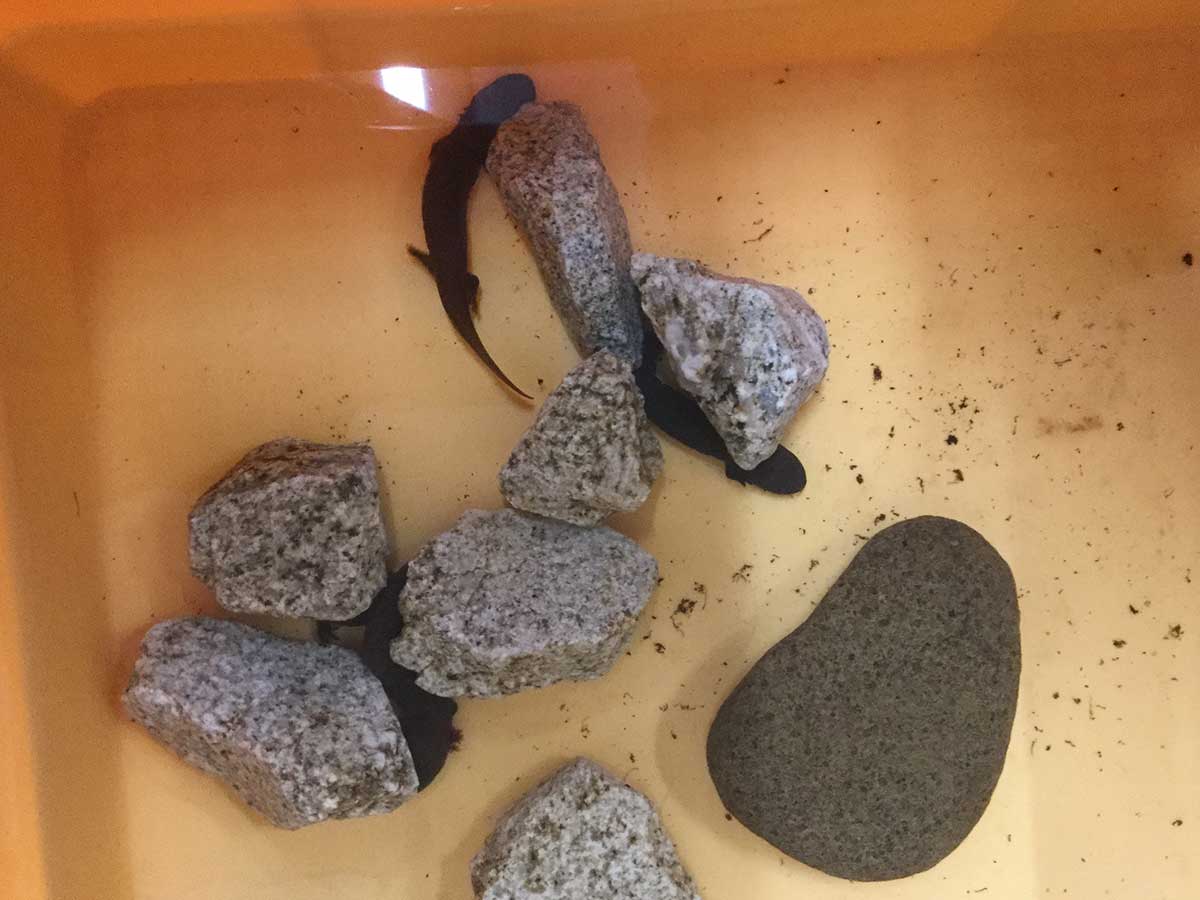 Who can tell that this old elementary school keeps nearly 200 giant salamanders in the swimming pool looking from the outside?

Also, you may want to ask: Why do they keep so many giant salamanders there? That is to protect Japanese giant salamanders from crossbreeding species. If you find a salamander, whatever species it is, you must turn it into the city or town office.

Information: You can see the giant salamanders in the building without reservation. If you are interested in seeing giant salamanders in the swimming pool, you need to make a reservation (contact me). Please note that they do not basically offer programs like feeding experience or touch tank, but if you are really interested, I‘ll try to ask them. So contact me here (but I can‘t guarantee that you would be able to get to do).