Hi, it’s Mineko! It’s been quite a while since I updated this blog. How is everyone doing? It was extremely hot here in Japan during the mid-summer, but thank goodness, it’s getting cooler as the summer is almost over. Temperatures like 38°C were normal here. Some places even hit 40°C. And this year, the effects of the Coronavirus were preventing us from spending summer like we used to. Still, I hope everyone was trying to have fun as much as possible. 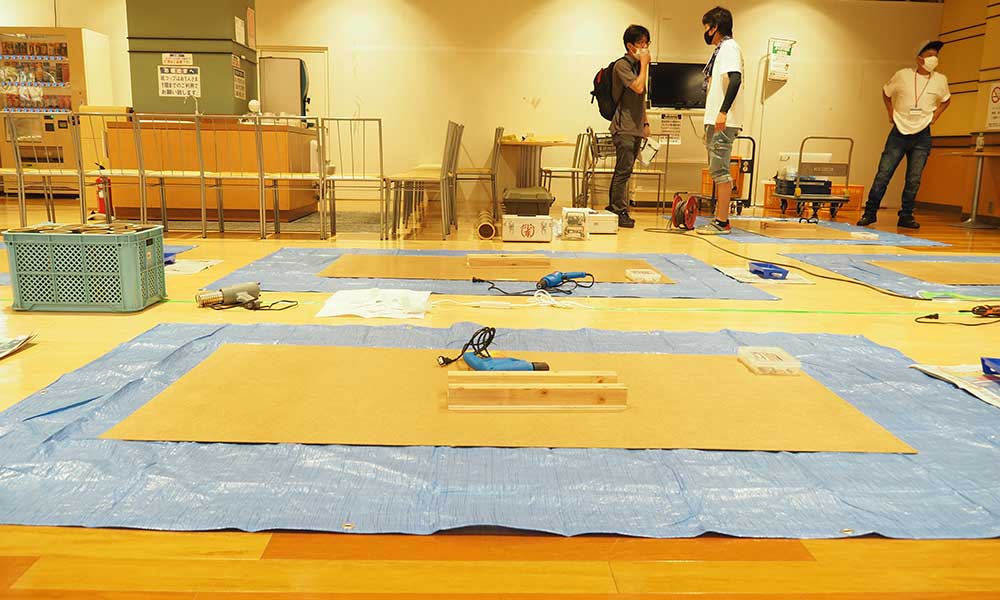 As a summer project, my son and I participated in a unique workshop to make bamboo lanterns held in Nabari, Mie Prefecture. The bamboo lanterns or bamboo lamps are made by drilling holes through a bamboo tube into your favorite design. And you place a light inside, like a jack-o-lantern.

I was thrilled that I knew the instructors would be “Takesuzume ,” a professional bamboo lantern creator group based in Nabari. Plus, the lanterns we made at this workshop will be displayed at Akame 48 Waterfalls for the autumn-winter illumination. To think of how many people the famous waterfalls attract, we’re very excited!

Before working on bamboo, we learned a little bit about the relationship between Nabari and bamboo crafting. During the Edo Period, Nabari was called “Iga-no-Kuni Nabari,” meaning “Nabari in Iga Province.” The area was ruled by Takayoshi Todo (adopted child of the famous castle architect, Takatora Todo). As Takayoshi was governing Iga-no-Kuni Nabari, a place called “Obata” suffered from heavy rain. Crops were damaged, and people’s lives were at stake. As a solution, the Obata people were solely allowed to make slow matches out of bamboo and sell them. As a result, the people were saved. Even now, the slow match is still being made there and used in “Okera-sai Festival” at Yasaka Shrine , a New Year’s tradition in Kyoto. Obata’s slow match is being used in the famous “Okera-sai”?! Wow! Amazing! I didn’t know any of this until I joined this workshop. I’m glad I signed up for it.

Each group was assigned to a crafting space with a bamboo tube and an electric drill. The first job we had to do was to pick the design pattern paper to glue onto the bamboo.

They had so many designs that I couldn’t decide at all. I wanted to try all of them! Then it turned out we had a little too many pieces on our tube… I was getting worried. With all these randomly placed white pieces of paper, I couldn‘t imagine this turning into a lantern. I wondered how this would come out when it was done. 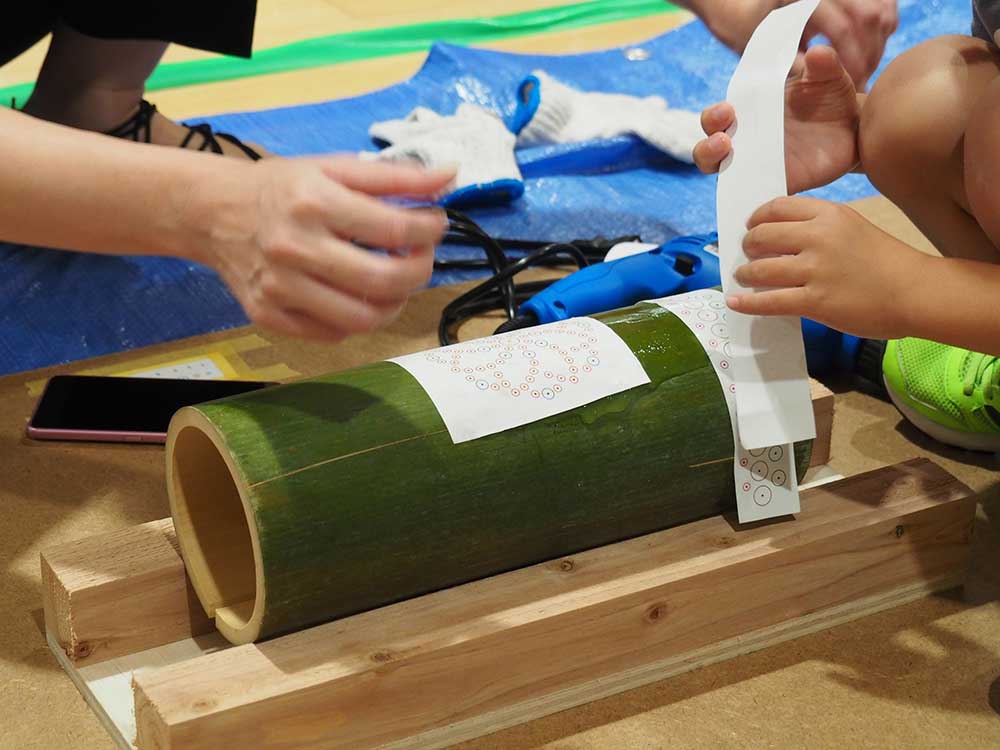 But we must continue!

After the paper dried out, we drilled holes through the bamboo with the electric drill. Designs were made of dots in 3 sizes; small, medium, and large. So I had to change the drill bits according to the dot sizes. 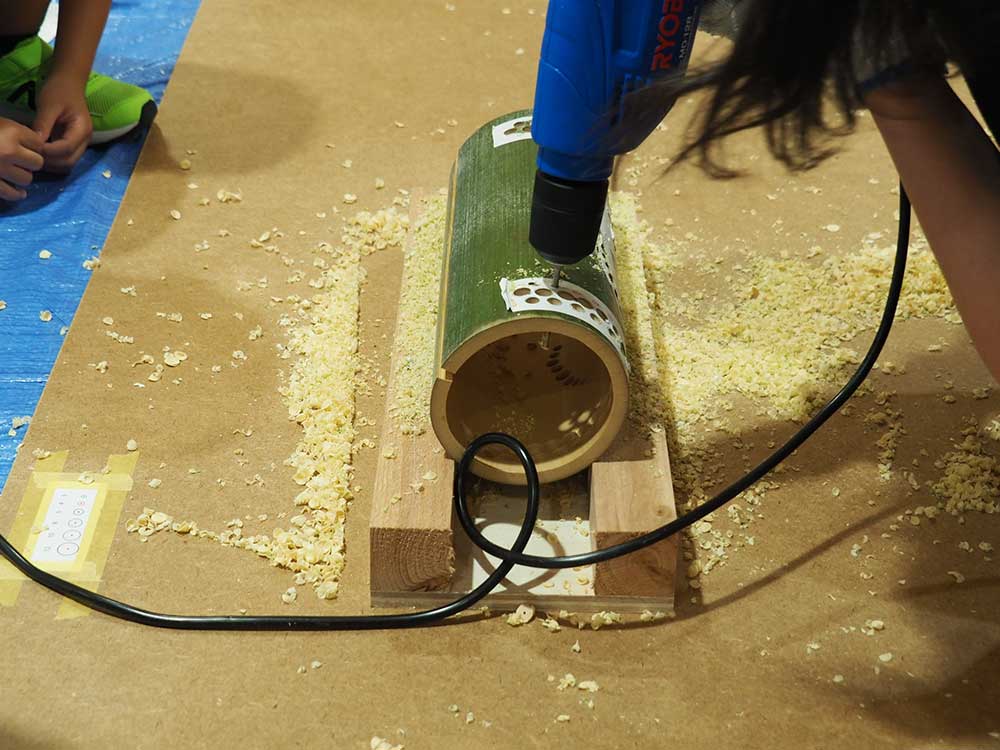 The more paper pieces we had on the bamboo, the more holes we had to make. We almost ran out of time, but we managed to finish drilling all the holes in time, with a little help from the instructor! Although it was hard for me to use the drill correctly at first, I got used to it by the end of the workshop, thinking of buying an electric drill for myself! 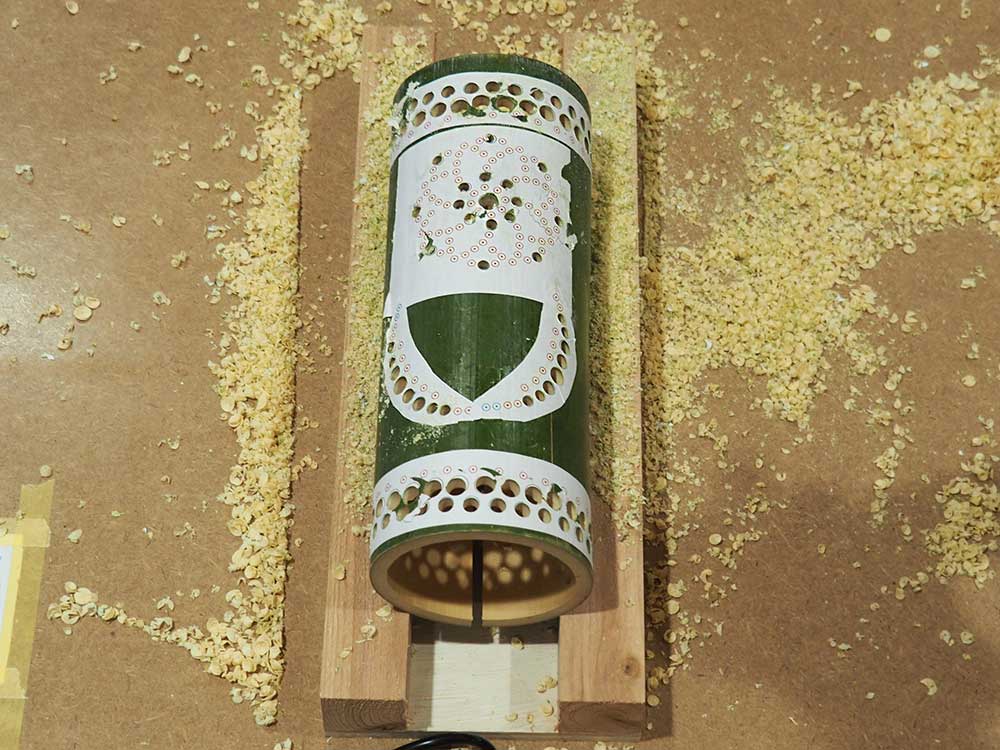 Now it‘s time to remove the paper. I was wondering how it would look… 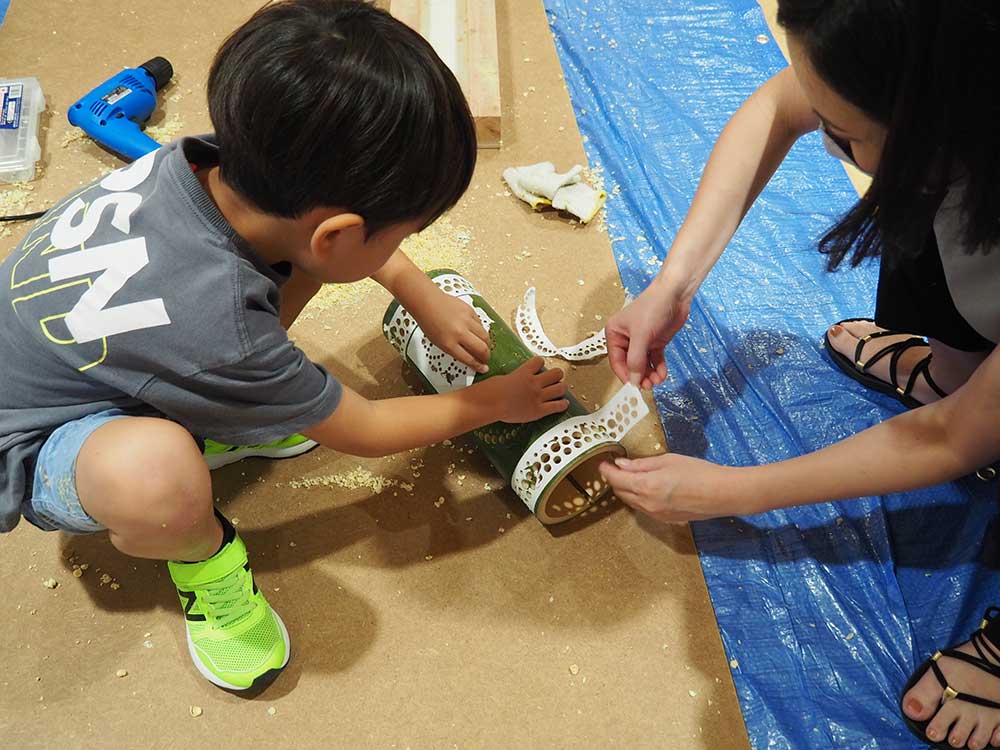 Here it is!
What do you think? I have to admit, I did a pretty good job! 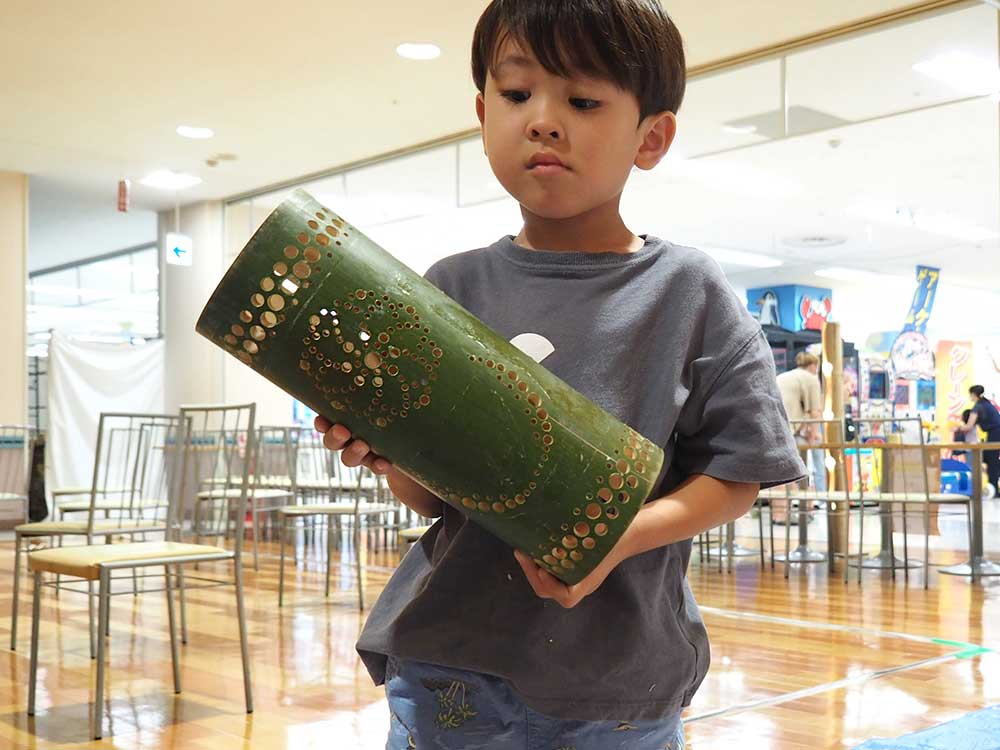 The bamboo lantern is lit

A light was placed in the lantern.
So beautiful! 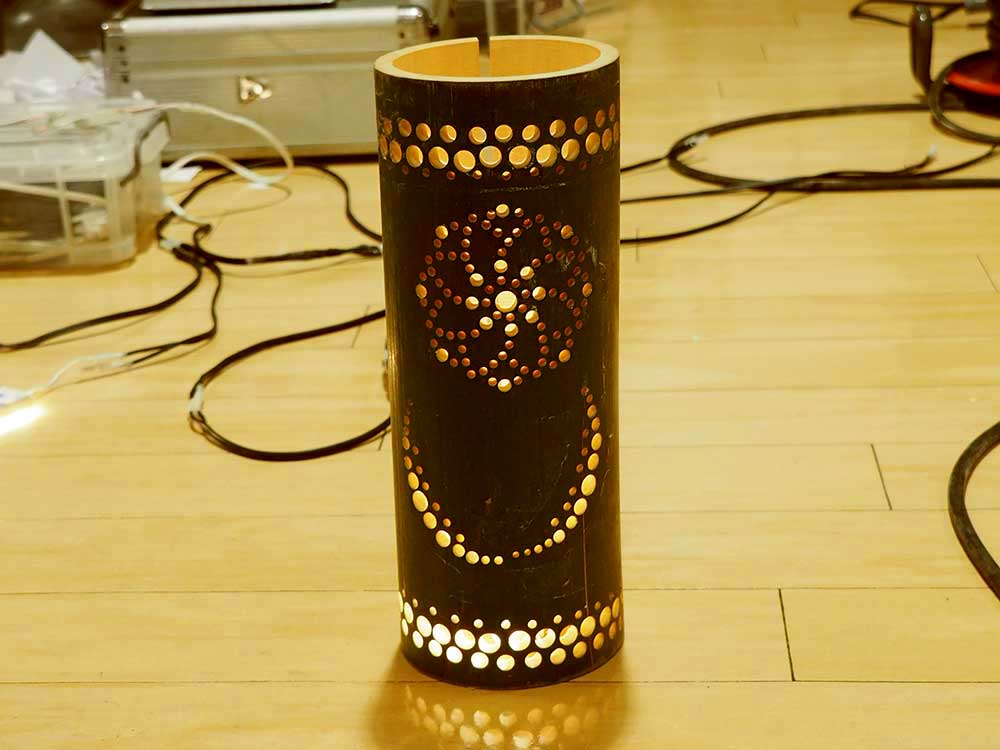 They looked fantastic with warm yellow light glowing out of a lot of dots. I am so excited to imagine how our bamboo lanterns will illuminate the waterfalls at night. It must be breathtakingly gorgeous. 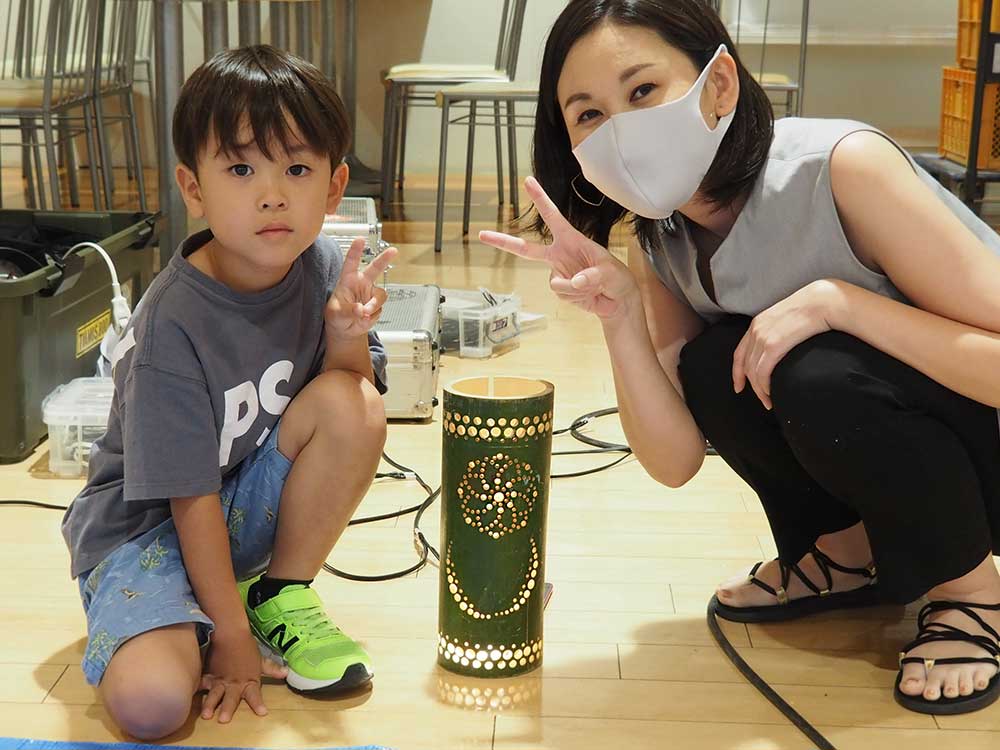 My son and I enjoyed the workshop more than I had imagined. I signed up for it for my son, but I actually got more into it than him! We are both looking forward to the illumination at the Akame 48 Waterfalls starting in late October.

I’m a happy housewife and a mother of a son. I prefer spending my time outside rather than indoors. I love hot springs, karaoke, and drinking alcohol!
View all posts by Mineko →