Is Mt. Kono a Planetarium on Earth Created by Ancient People?

Mt. Kono, located within the Nara Prefectural Tsukigase-Konoyama Natural Park, is a beautiful conical mountain with a gentle slope that stands at 618.8m above sea level. As there are no other high mountains around, you can enjoy a 360-degree panoramic view of Iga City of Mie Prefecture and cities of Nara Prefecture from the mountain top observatory.

With its excellent location (about a 6-minute drive from the highway Exit “Konoguchi”), Mt. Kono is a popular tourist destination that welcomes 50 thousand visitors annually, mainly from Osaka and Nagoya. It offers beautiful natural scenery throughout the year including rhododendrons in summer and colored leaves in autumn. This mountain is also known as one of the best spots for star-gazing in the Kansai region, and attracts many astrophotography enthusiasts. In the dark nights of ancient times when there was no electric light, the starry sky must have looked stunning beyond imagination!

Asterisms of 4000 Years Ago Spreads Across the Mountainside

In 2002, a survey conducted by Yamazoe Village found that giant boulders scatter along the Nabekura Valley, and that the positional relationship between the valley and the rocks corresponds to astronomical asterisms of 4,000 years ago, which was formed by the Milky Way, the bright red star Antares in the Scorpius, the three stars Vega, Deneb, and Altair that make up the Summer Triangle, and Pole Star.

4,000 years ago corresponds to the Jomon period in Japan. In those times, did people place the rocks on the ground in imitation of the constellation to make it the object of worship? Or was this place an astronomical observatory just like other megaliths such as the Pyramids and Stonehenge? Thinking about this sort of thing, I visited giant rocks on Mt. Kono in a relatively quiet time of year before autumn foliage season.

Nabekura Valley, a River of Rocks 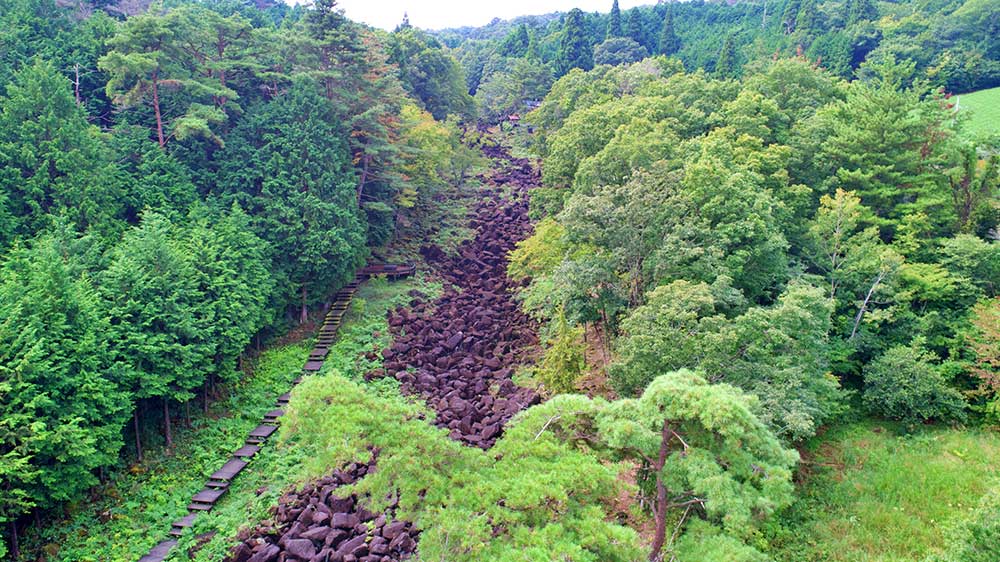 On the hillside of Mt. Kono lies Nabekura Valley, a waterless river that resembles a lava flow. The valley with a length of 650m and a width of 25m is filled with black rocks and pebbles varied in size from small to large (1m-3m). This accumulation of hornblende gabbro is considered a rare geological landscape.

Watch the video of the “river of rocks” that stretches toward far upstream.

Hike Up to the Peak on the Milky Way Route

There are several trail routes to get to the mountain top: “Temmaru Route” in which you walk on the easy-to-walk paved road, the fastest “Mee-Mee Route” that lets you get to the top within 10-15 minutes, and “Milky Way Route” in which you climb along the Nabekura Valley while looking for boulders. If you take the Milky Way Route, note that the wooden deck equipped on half of the trail can get slippery after rain or early morning dew.

Antares, the Heart of Scorpius

Hike up the Nabekura Valley, and you will find a signboard saying Ryuo-iwa Rock. Ryuo-iwa is said to signify Antares, the red supergiant star in the heart of the Scorpius. The rock is located on the opposite bank, inside the premises of a religious group. Through the bushes, you can find a rock wrapped with shimenawa (a sacred straw ropes).

Tengu-iwa Rock signifies Altair. Altair, which is called Hikoboshi or Kengyu-sei, is a familiar star to Japanese that is well-known in the Tanabata Star Festival on July 7th. This is the brightest star in the constellation Aquila. Nabekura Valley has many legends associated with Karasu-tengu (crow-billed goblin). One is that Nabekura Valley was made of the rocks thrown by the tengu during the battle against the one from Iga City; another one is that the tengu was a villager who had trained to become one. In Yamazoe Village, the Karasu-tengu has been loved by locals as the messenger from the god, the mountain god, or the guardian of creatures. Thus, the Tengu-iwa Rock symbolizes the beloved Karasu-tengu.

In the woods lies a burial mound called Otsuka, which is considered to represent Deneb, a blue-white star of the first magnitude that sits in the tail of the constellation Cygnus.

Otsuka mound is associated with a tragic myth of the goddess, “Hinohayahi”. This exquisite goddess, who had been annoyed to be stalked by male gods, had to frequently move to a new place to escape them, and the place she ended up living by was the Benten Pond on Mt. Kono.

However, the gods chased her all the way down to this pond. She could not put up with that, so she transformed into “Orochi”, an eight-headed giant snake. Then the gods put the snake to the sword, without knowing it was the goddess. When they knew the truth, they grieved over her and built a grave on the summit of Mt. Kono to worship her. This is how the Otsuka was created. Red azaleas that cover the whole mountain in spring are believed to be the blood of the chaste goddess.

This huge rock, Hachijo-iwa Rock represents Vega, the brightest star in the constellation of Lyra. In Japan, Vega is known as “Orihime” (weaving princess) in Tanabata, the star festival in Japan.

The name Hachijo-iwa means a rock with a size of eight tatami mats. Yes, the top of the rock at the height of the trail is about that size, but the steep slope of the rock seems much larger than that, about the size of fifty tatami mats. This enormous monolith is 7m in height and 10m in width! Multiple cuts found on the rock are said to be footprints or scratches of Tengu.

The current pole star is Polaris of the second magnitude. The Earth spins on its axis like a top, and the stars in the direction of the axis gradually change their position. In the research conducted in 2002, “Stella Navigator”, an astronomy simulation software that replicates the starry heavens during the period of 100,000 BC to 100,000 AC at high reproducibility, discovered that the location of Hokuto-iwa Rock corresponds to that of Thuban (Alpha Draconis in the constellation of Draco) which was the North Star 4,000 years ago. The study of Iwakura or “sacred rock formation” in Yamazoe Village originates from this Hokuto-iwa Rock.

There Are Still Many More

Mt. Kono still has many more huge rocks that are yet to be discovered. Some believe that these rocks, along with those shown earlier, form a planetarium on the ground that simulates the whole sky. Multiple remains of the Jomon period (Japan’s prehistoric period) have been found in the excavations conducted along the rivers, including the Nunome, Osose, Nabari, and Kasama. This means the area was supposedly a developed region in western Japan in ancient times. Moreover, many other rocks can be spotted around here; Ushigamine Iwaya-Masugata (a basin-shaped rock with a height of 16m), Choju-iwa (a round-shaped rock with a diameter of 7m), and Funa-iwa (a huge rock with a length of 10m, a width of 6m, and a height of 3m which is surrounded with a number of rocks placed around).

Some of the Iwakura rocks are located in the places not easily found or accessible, so I recommend that you visit the Tourism Association of Yamazoe Village beforehand to collect information. Also, the village has volunteer tour guides who can provide you with information not only about Iwakura rock, but about the ruins of the Jomon period, temples and shrines, cultural properties, and historic sites of the village. Learning about the local history, myth, customs and cultures will make your trip more fulfilling!

Photographs by the author

An experienced underwater photographer and writer. In recent years, aerial photography with a drone has been starting, and the range of article expressions is expanding. Contributing travel reports, and commentary articles about the how-to-use underwater camera or the drones, for mainly online magazines. Also a contributor to global stock photo agencies such as Getty Images and Alamy.
Recently, Published a guidebook about The 50 Best Diving Spots in japan with US photojournalist Tim Rock.
Blog: Everything about underwater and sky
View all posts by Noriyuki Otani →