Mahoroba Sakura Route in Uda City, Nara, takes you to two very special shrines, along country roads to an Edo-era streetscape, past a breathtaking pastoral landscape dotted with rural cafés and parks to a 300 year old cherry tree with a trunk circumference of over three meters, then loops back along a paved, riverside, cherry tree-lined trail: prime cycling! 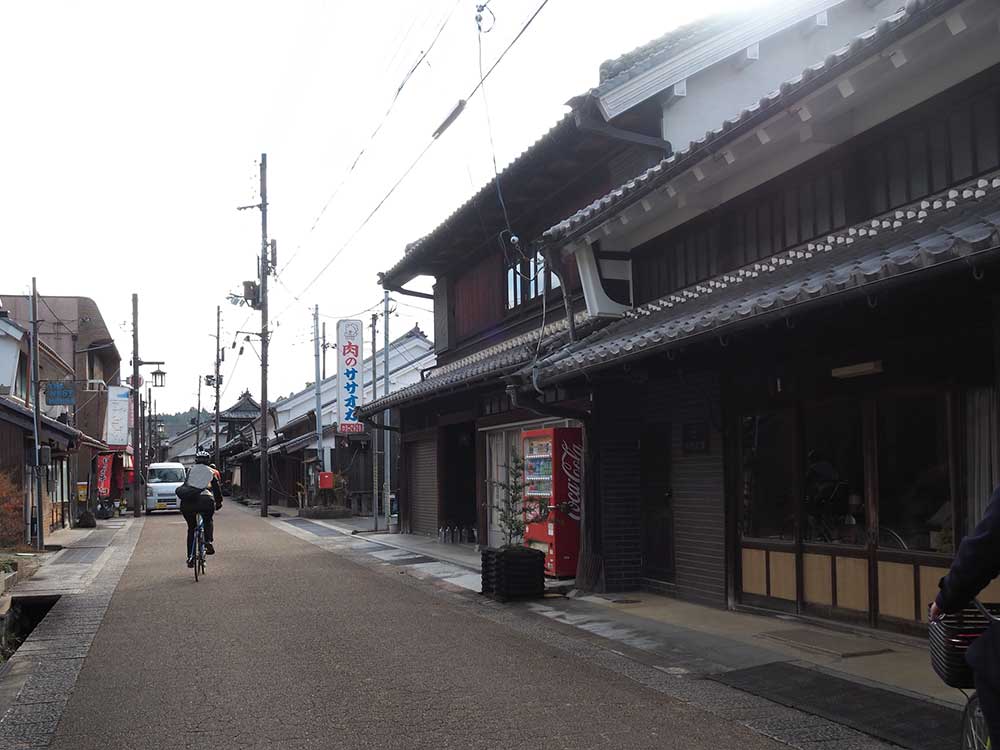 This route covers almost 20 kilometers, mostly on the flat, and mostly away from traffic and allows for a lot more sightseeing and café time than cycling time. The ride starts and finishes at Haibara Station. To get there from Osaka, Nara, Kyoto, and Nagoya in the most efficient manner, hop aboard a select Kintetsu Limited Express train . Aim to arrive just before 9 AM to make the most of your day, as I did. From the South Exit at Haibara Station, make a sharp left and you will find an information center next to a public washroom. That is where you can rent electric-assist bicycles with small wheels, gears, adjustable seat height, and a basket. A helmet is included. [1]

The Mahoroba of “Mahoroba Sakura Cycling Route” is the Japanese arcadia, El Dorado or Shangri-la, a paradise said to be in Nara and “sakura,” cherry blossom, is a nod to the many cherry trees along the latter half of this route.

I ventured out on a chilly Sunday in December to join the crew from East Nara Nabari Tourism for this ride—no cherry blossoms, but we were blessed with soft sunshine. The first stop was within five minutes of the station. We walked our bicycles across a vermillion-red foot-bridge across the Uda River to the foot of the vermillion and white Sumisaka Shrine, home to the god of health, founded by Emperor Sujin, Japan’s 10th emperor. 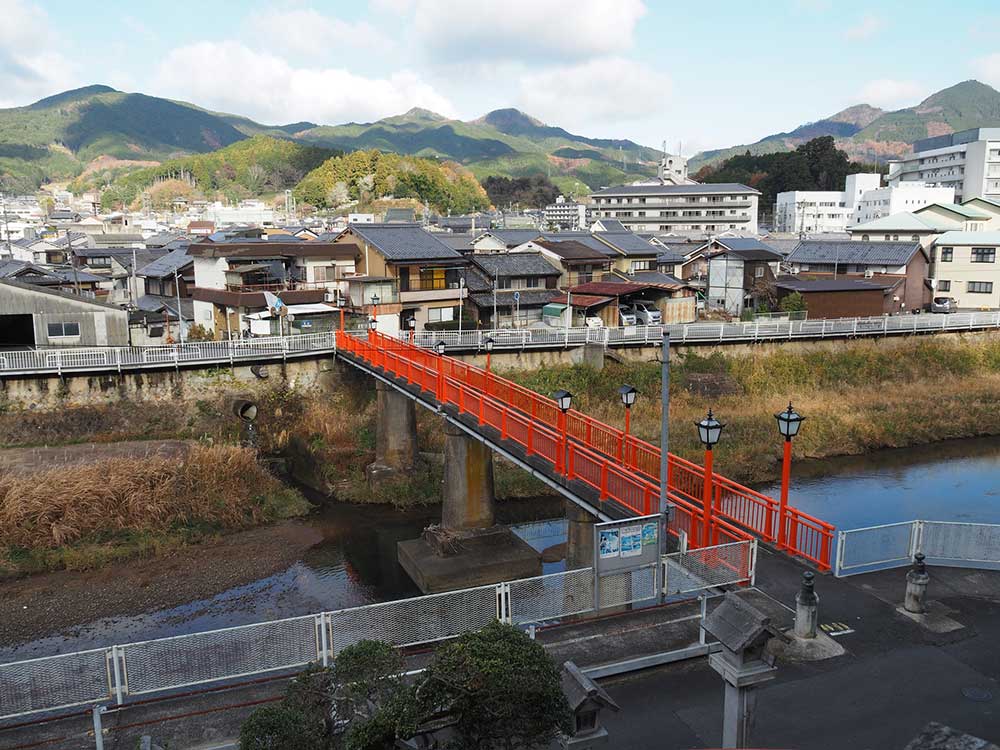 It is said that the Emperor Sujin prayed here for the end of a plague, which he too suffered from, and that his prayer was granted. What better place to pray for the end of COVID19?! Also at this site is a pond of holy water and a spiritual spot presided over by a giant cedar tree: touch the tree to heal the heart. Touching giant cedar trees certainly feels like it heals my heart. You may come witness ancient rituals and festivals at this shrine, but the day I rode my bicycle up to its pebbled courtyard, the shrine was absolutely quiet, as if in a deep sleep.

I wonder if people once mined and powdered cinnabar crystals to make the vermillion for this shrine. Cinnabar is a common mineral common in regions with recent volcanic action and hot springs, such as Japan. Wikipedia tells me ancient people suffered from mercury poisoning in this process of making vermillion-red. On the bright side, the mercury in the color preserves wood.

Yamato is also known for lacquer ware colored with vermillion. I wonder if they tried to lacquer the shrine. “Since ancient times, vermillion was regarded as the color of blood, thus the color of life. It was used to paint temples and the carriages of the emperor, and as the printing paste for personal seals . It was also used for unique red calligraphic ink reserved for emperors. Chinese Taoists associated vermillion with eternity.” (Vermillion, Wikipedia ). In addition, it is commonly known amongst Japanese that the reason Shinto shrines are colored vermillion is that the color is believed to ward off evil spirits. 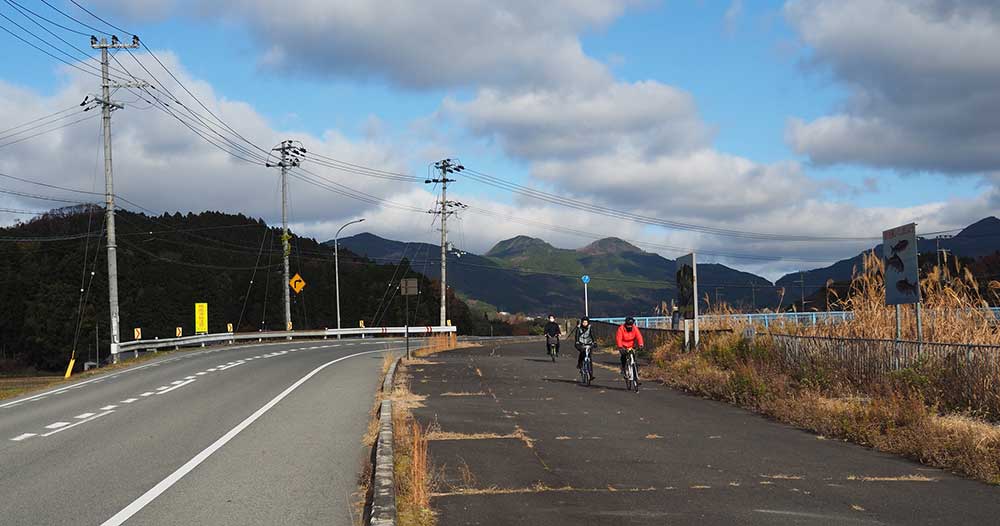 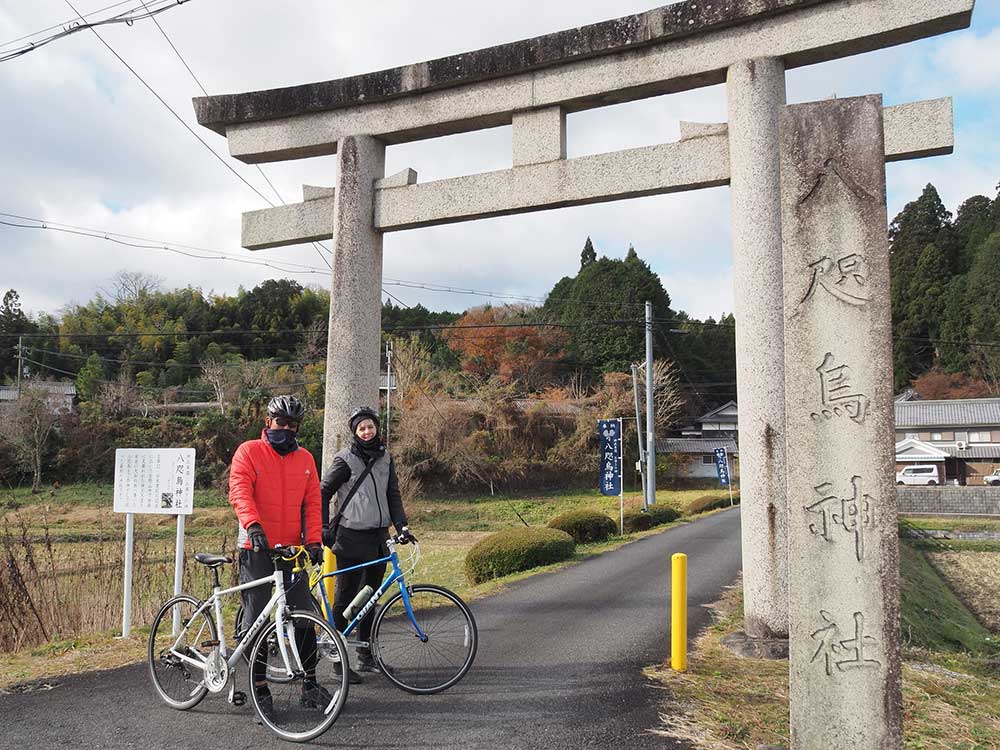 Can you find a three-legged crow balancing a soccer ball on his head? A three-legged crow deity also exists in Chinese mythology. Possibly, Chinese influence morphed the Japanese crow with the Chinese crow to become “yatagarasu,” an entity to be reckoned with, and prayed to before big soccer matches. 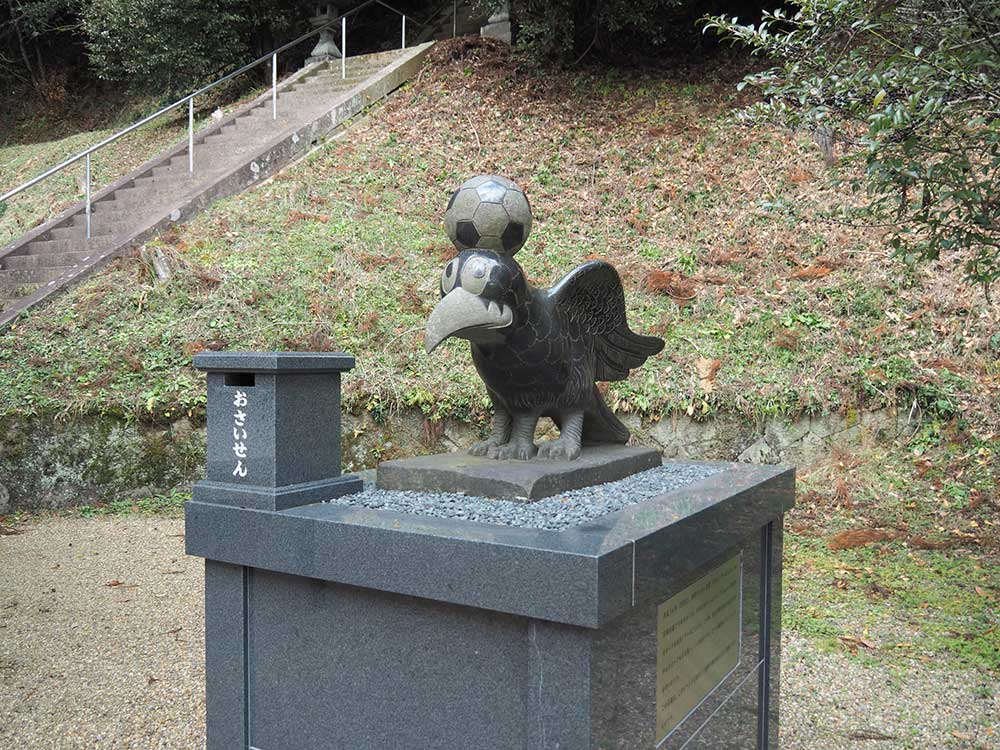 In ancient times crows symbolized rebirth because they flock to carrion, and human carcasses in the aftermath of great battles. Japanese folklores tell of a sacred crow, sent from the spirit world to guide Japan’s first emperor, Jimmu, from Kumano Hongu Taisha in Wakayama to Yamato over a distance of… about 120 kilometers, “as the crow flies.” Medicine Town from the 16th Century

We set off again. A taxidermy shop caught my eye. Five kilometers along we came to Uda-Matsuyama. What a treasure! It is a narrow merchant street of wooden, still-functioning, Edo-era buildings, a medicine town from the 16th century! 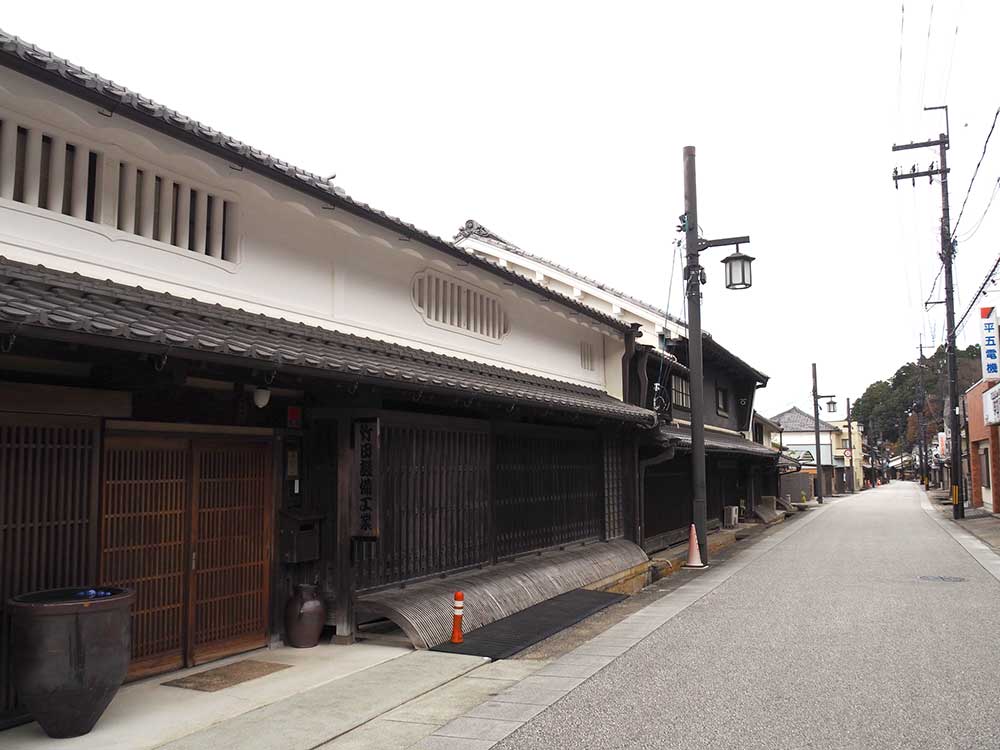 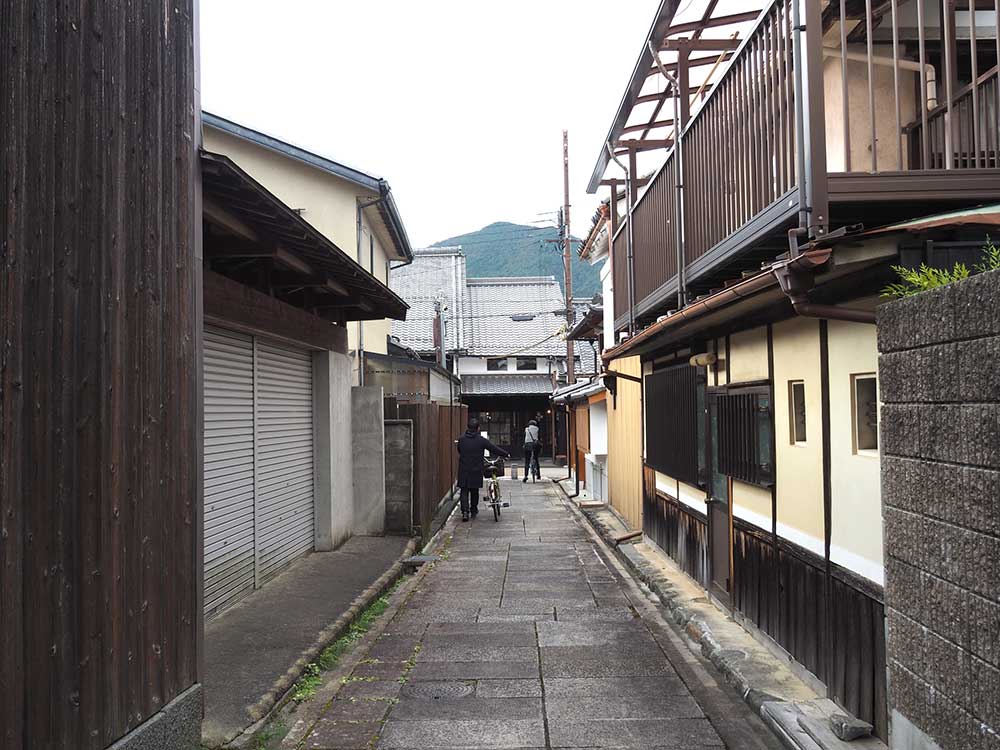 There is so much to take in. I recommend walking. Look into shop windows, or be brave and step inside. I stepped into Shobundo Book Store . It was like a museum to the past three decades. Also, find Morino Medicinal Herb Garden on the same street. We explored Uda City Historical Museum of Medicine “Kusuri-no-Yakata” [2], former residence and pharmacy of the founders of Fujisawa Pharmaceuticals where I was told that servants of wealthy families during the Edo era stayed in those street-front rooms above their shops, with narrow, barred windows. No thank you. Feeling grateful for my freedom (and health!), I unlocked my bicycle.

The combination of fresh air and exercise invariably gives me an appetite. We poked into a sweets shop Shogetsu-do [JP] further along, and tried kimigoromo (140 yen), a square of a soft, light, egg-based sweet. Dessert before the main course! Yum.

There are quite a few attractive-looking cafes in this area. Then we found one for a slow lunch. Sixty-minutes of free Wi-Fi is available in the area.

Bellies full, we crossed over to Michi-no-Eki ‎Udaji Ouda. Around the corner, a colorful menu board in English caught my eye: bread, spiced curry, hot dogs, hot sandwiches, sandwiches, cheese. The menu inside also listed pickles, anchovies, French fries, fried chicken, and more. Honesty, I was full but this shop looked so appealing. 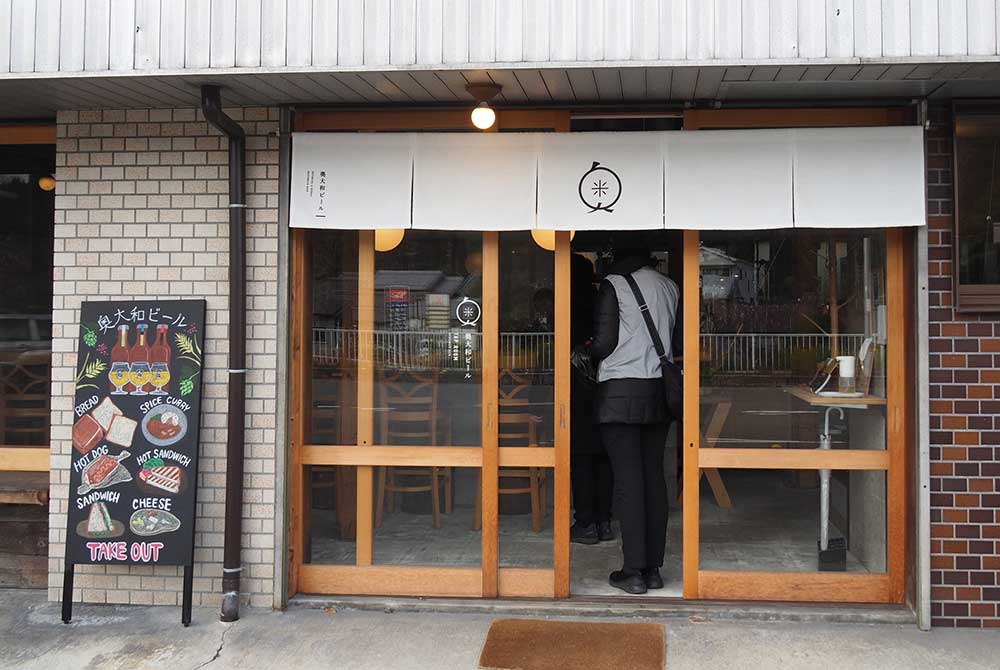 Upon further investigation, I found this to be Okuyamato Beer [JP] Microbrewer/Tap Room/ Tap Studio/ Tap to Bed [3] offering at least ten unique varieties of prize-winning craft beer, some using local herbs as well as herb tea, kombucha, hand-drip coffee, juice and kid’s beer. I was smitten and am planning a trip back to stay there during cherry blossom season, in April. We hopped on our bicycles for a jaunt through pastoral landscape, whizzing past a wooden sign board at the trail leading into the woods that I touched my brakes enough to read: “power spot” (written in katakana.) Next time.

Hoping to Come Back in the Cherry Blossom Season

We took a gander at the winter-bare profile of Matabei Cherry Tree, over 300 years old. 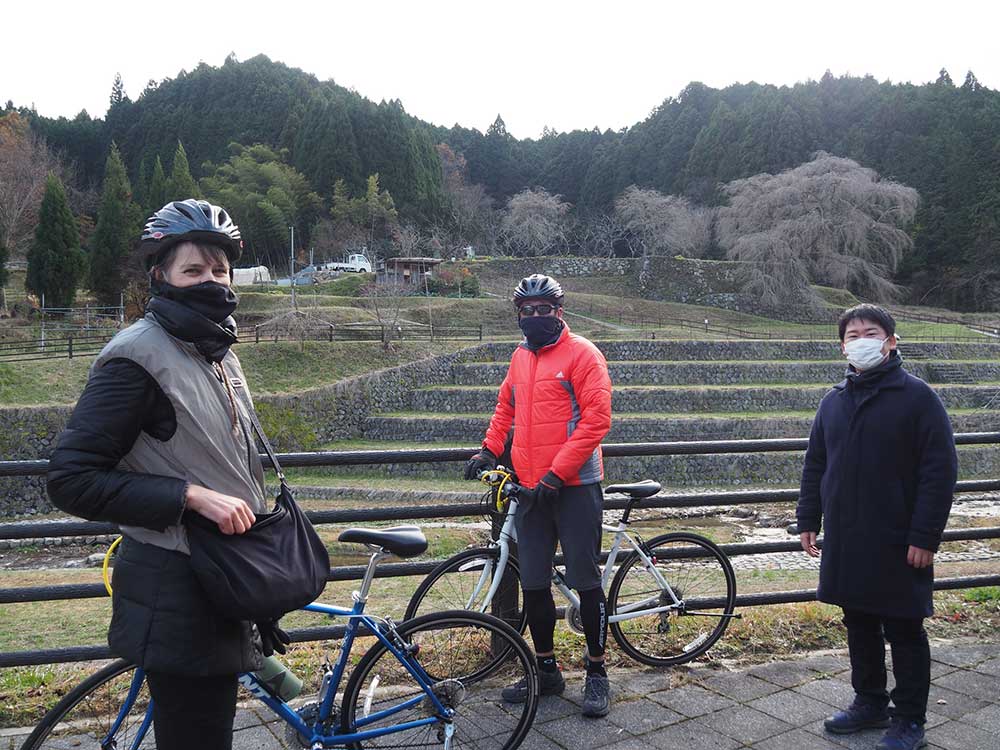 The final attraction of this route is an off-road riverside trail, lined with cherry trees, with sweeping views. Prime cycling. Enjoy. 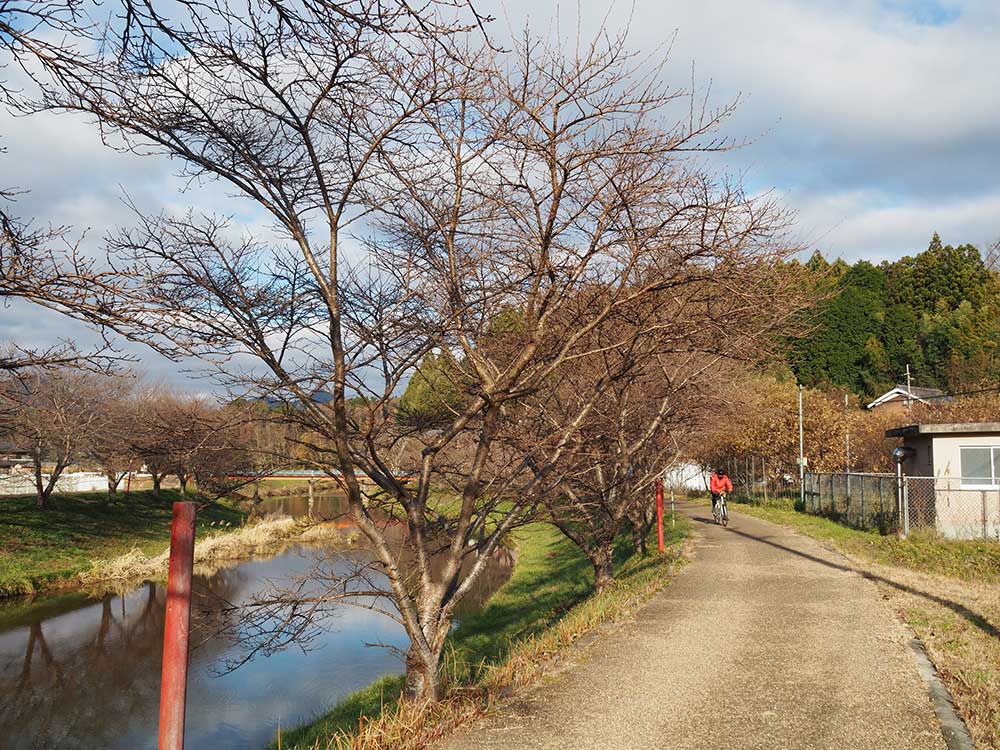 [2] Entrance Fee 310 yen, children 150 yen, open 10 AM to 4 PM, closed Monday/Tuesday or the following day if Monday/Tuesday is a national holiday, and from December 15 through January 15.